Prior to beginning this CME activity, please review the CME Information. 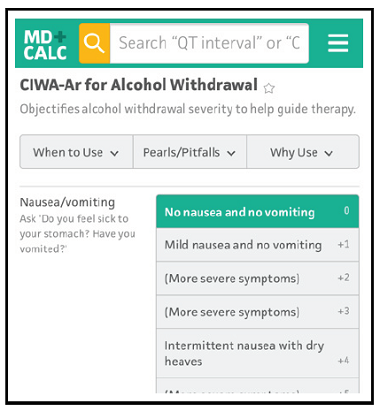 The Clinical Institute Withdrawal Assessment for Alcohol, revised (CIWA-Ar) scale provides an efficient and objective means of assessing alcohol withdrawal that can then be utilized in treatment protocols. The CIWA-Ar can be used for patients for whom there is clinical concern for alcohol withdrawal in a variety of settings, including outpatient, emergency, psychiatric, and general medical-surgical units. It is important to note that the CIWA-Ar cannot be used effectively in patients who are intubated and sedated; a sedation scale such as the Richmond Agitation-Sedation Scale would be more appropriate in that setting.

Patients frequently underreport alcohol use, and clinicians often overlook alcohol problems in patients (Kitchens 1994). It is estimated that 1 out of 5 patients admitted to a hospital abuses alcohol (Schuckit 2001). Unrecognized alcohol withdrawal can lead to potentially life-threatening consequences including seizures and delirium tremens.

For a given individual, there is no absolute relationship between alcohol use pattern and risk of physiologic dependence or withdrawal. In general, any suspicion of daily alcohol use over several weeks or more, regardless of quantity, should raise concern for potential alcohol withdrawal. Additional variables that may contribute to risk include age, medical comorbidities (eg, hepatic dysfunction), concomitant medication use, and low seizure threshold (Roffman 2006).

Benzodiazepines are generally used to control psychomotor agitation and prevent progression to more severe withdrawal. Diazepam, lorazepam, and chlordiazepoxide are the most frequently used benzodiazepines. Clinicians should follow their hospital's alcohol withdrawal protocol; frequently, treatment begins with benzodiazepines when CIWA-Ar scale scores reach 8 to 10, with standing or as-needed dosing for scores of 10 to 20. Some protocols include transfer to the intensive care unit for scores >20. Clinicians should consider additional supportive care, including intravenous fluids, nutritional supplementation, and frequent clinical reassessment including vital signs.

There is also some evidence for combined symptom-triggered and fixed-schedule treatment utilizing the CIWA-Ar scale (Daeppen 2002).

The original Clinical Institute Withdrawal Assessment for Alcohol (CIWA-A) scale, published by Shaw et al in 1981, was developed to assess the severity of alcohol withdrawal, both to monitor response to treatment and for use in research. The CIWA-Ar scale developed by Sullivan et al (1989) eliminated several redundant and ineffective items to increase the scale’s efficiency while retaining clinical usefulness, validity and reliability. The study proposed using the CIWA-Ar scale as a shortened version of the original CIWA-A scale.

Reoux and colleagues compared routine hospital alcohol detoxification practice with the CIWA-Ar-based as-needed protocol in a retrospective chart review and found fewer total chlordiazepoxide milligram equivalents were used over a shorter duration with utilization of the CIWA-Ar scale. 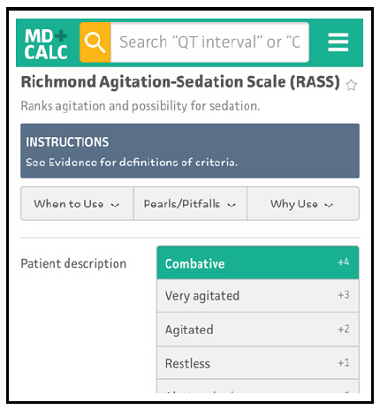 The Richmond Agitation-Sedation Scale (RASS) is a validated and reliable method to assess patients’ levels of sedation in the intensive care unit (ICU). The RASS is different than the levels of sedation/ analgesia used by the American Society of Anesthesia (minimal, moderate, deep, general), and the two should not be used interchangeably.

As opposed to the Glasgow Coma Scale, the RASS is not limited to patients with intracranial processes. The RASS can be used in all hospitalized patients to describe their level of alertness or agitation. However, it is mostly used in mechanically ventilated patients in order to avoid over- and undersedation. A RASS score of -2 to 0 has been advocated in this patient population in order to minimize sedation. This strategy has been shown to reduce mortality, and to decrease the duration of mechanical ventilation and the length of stay in the ICU.

A RASS score should be obtained for all hospitalized patients and at regular intervals in all mechanically ventilated patients. Unless a patient meets indications for deep sedation, a protocol for minimal sedation (RASS -2 to 0) should be used.

4 AMA PRA Category 1 Credits.™ Specialty CME Credits: Included as part of the 4 credits, this CME activity is eligible for 4 Pharmacology CME credits, subject to your state and institutional approval.

Specialty CME: Included as part of the 4 credits, this CME activity is eligible for 4 Pharmacology CME credits, subject to your state and institutional requirements.

Faculty Disclosures: It is the policy of EB Medicine to ensure objectivity, balance, independence, transparency, and scientific rigor in all CME-sponsored educational activities. All faculty participating in the planning or implementation of a sponsored activity are expected to disclose to the audience any relevant financial relationships and to assist in resolving any conflict of interest that may arise from the relationship. In compliance with all ACCME Essentials, Standards, and Guidelines, all faculty for this CME activity were asked to complete a full disclosure statement. The information received is as follows: Dr. Beauchamp, Dr. Pizon, Dr. Sampson, Dr. Swartzentruber, Dr. Yanta, and their related parties report no relevant financial interest or other relationship with the manufacturer(s) of any commercial product(s) discussed in this educational presentation.

Commercial Support: This supplement to Emergency Medicine Practice did not receive any commercial support.

Hardware/Software Requirements: You will need a computer, tablet, or smartphone to access the online archived article and CME test.

Additional Policies: For additional policies, including our statement of conflict of interest, source of funding, statement of informed consent, and statement of human and animal rights, visit www.ebmedicine.net/policies