The Patient Health Questionnaire-9 is used to provisionally diagnose depression and stratify the severity of depression symptoms. 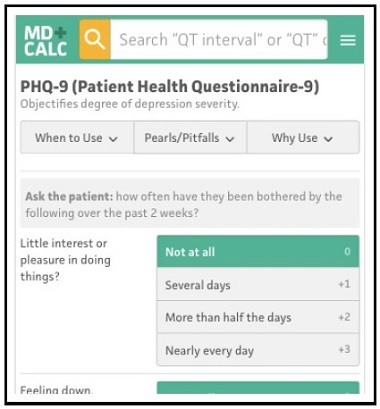 The PHQ-9 objectively determines initial symptom severity in depression. It also monitors symptom changes and the effect of treatment over time.

The PHQ-9 is a screening tool that is used:

The final diagnosis of depression should be made with a clinical interview and mental status examination, including assessment of the patient’s level of distress and functional impairment.

A suicide risk assessment should be performed for patients who respond positively to item 9 on the PHQ-9 (“Over the last 2 weeks, how often have you been bothered by thoughts that you would be better off dead or of hurting yourself in some way?”).

Bipolar disorder, normal bereavement, and medical disorders should be ruled out as the causes of depression.

The PHQ-9 was initially developed by Kroenke et al (2001) as a subset of 9 questions from the full Patient Health Questionnaire, which had been derived previously and studied in a cohort of 6000 patients in 8 primary care clinics and 7 obstetrics and gynecology clinics (Spitzer 1999). PHQ-9 scores of ≥ 10 points were found to be 88% sensitive and 88% specific for detecting MDD. Kroenke et al (2001) assessed the criterion validity in a sample of 580 patients.

Arroll et al (2010) validated the PHQ-9 as a screener for MDD in a cohort of 2642 primary care patients and found slightly higher specificity (91%) and lower sensitivity (74%) at the same cutoff of ≥ 10 points.

The PHQ-9 has also been validated in several additional subpopulations, including in psychiatry patients (Beard 2016), patients with medical comor-bidities such as multiple sclerosis (Ferrando 2007) and Parkinson disease (Chagas 2013), pregnant patients (Sidebottom 2012), and in an occupational health setting (Volker 2016). 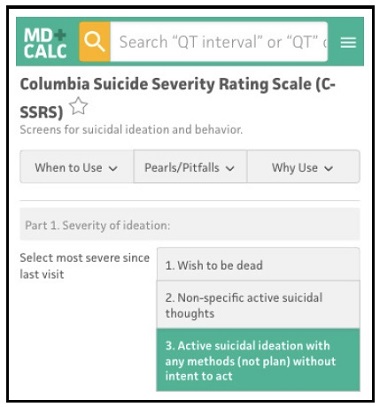 Suicide risk assessment is complex; the C-SSRS can assist clinicians in evaluation of patients in the emergency department to predict overall suicide risk and the need for admission. The C-SSRS has been extensively validated in several subpopulations, including children and adolescents, military veterans with concomitant posttraumatic stress disorder, and psychiatry outpatients.

The C-SSRS should be used in patients in the emergency department for whom there is a concern for suicidality.

Protocols vary by institution, but most recommend a complete assessment by a psychiatrist and inpatient admission for patients identified as high risk (Level 4 or 5). Patients at low to moderate risk should be reassessed by a trained clinician and may not require admission.

The C-SSRS should not replace a complete clinical evaluation. It may be employed as an initial screening to guide a clinician in suicide risk assessment and to help stratify patients into categories of low, moderate, or high risk.

While suicidal ideation and behavior had previously been understood as one-dimensional, with passive ideation progressing to active intent and then to suicidal behavior, the C-SSRS attempted to separate ideation and behavior by using 4 constructs (severity of ideation, intensity of ideation, behavior, and lethality), based on factors identified in previous studies as predictive of suicide attempts and completed suicide.

In a study of 3776 patients who had a baseline C-SSRS screening and at least 1 follow-up, positive reports had 67% sensitivity and 76% specificity for identifying suicidal behaviors (Mundt 2013).

Similar findings have been reproduced by others. In a longitudinal study of 1055 adults admitted to a psychiatric hospital, the C-SSRS was found to have excellent internal consistency (alpha = 0.95), with the summary score and total score revealing adequate classification for suicide-related behavior within 6 months (sensitivity 69%; specificity 65%- 67%) (Madan 2016).

The C-SSRS has been used in numerous trials and has been extensively validated in several sub-populations, including children as young as 5 years of age (Glennon 2014); military veterans with concomitant posttraumatic stress disorder (Legarreta 2015); and outpatients in a psychiatry clinic (Viguera 2015). It has been translated for use in more than 30 languages (Gratalup 2013). 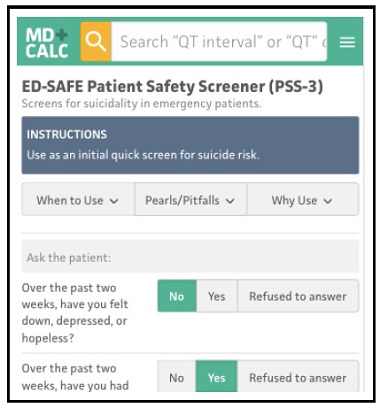 Among patients presenting to the ED with nonpsychiatric chief complaints, 3% to 12% also have suicidal ideation (Boudreaux 2013). Identification of these at-risk patients is an important first step in implementing an intervention to prevent the sequelae of suicidal behavior. Traditional suicide-risk measures are lengthy and complex, but the PSS-3 is a short, efficient screening tool that can be integrated easily into an existing clinical workflow in the ED.

The PSS-3 should be used to screen for suicide risk in patients presenting to the ED for any complaint, including nonpsychiatric complaints.

A patient with a positive screening result on the PSS-3 should be further assessed by the treating clinician to determine whether a mental health professional should be consulted. The provision of a safety plan should also be considered.

The PSS-3 is meant to be a universal screening tool. All patients presenting to the emergency department (ED) can be screened with this tool, even when the primary complaint is nonpsychiatric.

The PSS-3 is a screening tool and not an endpoint. A positive screening result should prompt the clinician to assess the patient further for suicidality and to consider consulting a mental health professional.

More in-depth screening and assessments tools for suicide risk include the BSSI and the Columbia- Suicide Severity Rating Scale (C-SSRS). Patients for whom there is high concern for suicidality should be assessed by a mental health specialist.

Boudreaux et al (2013) designed the Emergency Department Safety Assessment and Follow-up Evaluation (ED-SAFE) study to determine whether universal screening of ED patients could improve detection of patients with suicide risk, and whether an intervention initiated from the ED visit can improve outcomes related to suicidality. Given the high-risk nature of suicidality, the ED-SAFE investigators used a quasi-experimental multiphase design instead of a randomized control trial.

Eight EDs in 7 states participated in the study, including large academic centers as well as small community hospitals. The objective of Phase 1 of the study, “Treatment as Usual,” was to obtain baseline data. Research assistants prospectively collected data from chart documentations of intentional self-harm ideation or behavior, and patients received the usual care. In Phase 2, “Universal Screening,” screening was implemented with the PSS-3 being administrated by the primary treating nurse. In Phase 3, “Universal Screening Plus Intervention,” patients with a positive screening had secondary screening administered by a physician to determine whether to consult a mental health specialist. Patients also received a safety plan and up to 7 follow-up phone calls over the next year as part of the intervention. Outcomes were assessed by phone interviews or medical record reviews at 6, 12, 24, 36, and 52 weeks.

The 3-item PSS-3 was used for universal screening in the ED-SAFE Study. The original Patient Safety Screener, called the PSS-5, consisted of 5 items derived from the Patient Health Questionnaire-9 (PHQ-9) and the C-SSRS. The PSS-5 assessed for anhedonia, depressed mood, passive suicidal ideation, active suicidal ideation, and lifetime suicide attempt.

The validation study by Boudreaux et al (2015) compared 2-item and 3-item versions of the Patient Safety Screener (PSS-2 and PSS-3, respectively) with the well-validated but much lengthier BSSI. The PSS-3 assessed for depression, active suicidal ideation, and prior lifetime suicide attempt, while the PSS-2 omitted the question related to depression. Patients who were unable to engage in conversation were excluded. Patients had a positive screening result if there was active suicidal ideation in the previous 2 weeks or if there was a lifetime history of suicide attempt. The study enrolled 951 participants across 3 EDs, with 459 participants randomized into the PSS-2 group versus 492 participants in the PSS-3 group. Overall, 15.2% of the patients had a positive screening re-sult. A strong agreement with the BSSI was demonstrated for both the PSS-2 (kappa = 0.94) and the PSS-3 (kappa = 0.95); however, the agreement on active suicidal ideation was stronger for the PSS-3 (kappa = 0.61) than for the PSS-2 (kappa = 0.34).

Caterino et al (2013) summarized the baseline suicide risk screening rate by reviewing 94,354 charts in a prospective observational cohort study, which was the first phase in the larger ED-SAFE study. One of the study sites was an outlier, as it included a version of universal screening as part of “treatment as usual.” Overall, 26% of the patients in the study were assessed for self-harm, with that proportion dropping to 12% when excluding the data from the outlier site. In this Phase 1 study, only 2.7% of patients were documented as having current self-harm ideation. The study also found that men, in general, and younger men, in particular, were more likely to be assessed for self-harm, while older adults (aged ≥ 65 years) were less likely to be assessed.

Miller et al (2017) analyzed the effects of implementing an ED-initiated intervention for patients who were positive on the universal screening. The intervention consisted of a secondary suicide risk screening conducted by the treating ED physician, the provision of a safety plan that was reviewed with the patient by nursing staff, and follow-up phone calls from advisors trained on the Coping Long Term with Active Suicide Program (CLASP) protocol to reduce suicide risk. The study enrolled 1376 patients in 3 phases: 497 in the treatment-as-usual phase, 377 in the universal-screening (“screening”) phase, and 502 in the universal-screening-plus-intervention (“intervention”) phase.