Screening and managing depressed and suicidal patients in the ED

Though there is growing evidence that shows that ED patients present with high rates of depression and suicidal ideation, there are some novel strategies that emergency clinicians can use to quickly identify patients most at risk:

What are the DSM-5 symptoms for major depressive disorder (MDD)?

Is it necessary to diagnose MDD in the ED?

What are the differences between suicidal thoughts, ideation, gestures, and plans? How can you tell?

Are all suicidal patients “depressed?”

When is it appropriate to ask a patient whether they’ve been thinking about suicide?

What are the uses and validation evidence for PHQ-9, ED-SAFE PSS-3, C-SSRS, SAFE-T, ICARE2?

What are the 7 things that emergency clinicians are recommended to do when assessing patients with exacerbating psychiatric complaints?

Lethal-means counseling, no-suicide contracts, safety planning, zero suicide: what works, and how are they administered?

Do intoxicated patients need to sober up before evaluating them for suicidality?

What is the status of using inhaled ketamine (esketamine) in the ED?

With more than 12 million emergency department visits annually related to substance abuse and mental health crises, and approximately 650,000 patients evaluated for suicide attempts, the ED is a critical clinical setting for intervention. This review presents an ED-focused approach to assessing depression and suicide risk, including background information on the classification, epidemiology, and known pathology of depression, as well as the assessment of suicide risk within depression. Best-practice recommendations are made regarding current mental status evaluation and management strategies. Cutting-edge interventions and approaches, including the use of assessment and screening tools, implementation of safety planning, the Zero Suicide model, continuing postdischarge contact, lethal-means counseling, and novel pharmacotherapy approaches are also reviewed.

Between managing a septic patient and another with an acute stroke, you note 3 patients waiting to be seen: a 30-year-old apparently healthy man with an upper respiratory infection, an elderly man with a sprained ankle, and a woman needing a medication refill. The young man has a URI, but you also find out that he recently moved to the city and states that he is feeling “overwhelmed” and “sad;” at times thinking of ending his life because he “would be better off dead.” He has never seen a psychiatrist and has never been told by his primary care provider that he has any psychiatric illness. You wonder whether this patient meets criteria for a major depressive episode and whether there are screening tools that could be helpful in deciding whether a psychiatric consultation is indicated...

You enter the next bay to manage the elderly man with the ankle sprain. As you enter, you are met by a woman stating that she is concerned that her father, who twisted his ankle, has been increasingly depressed and has said to her on several occasions, “Maybe I’d be better off dead.” When talking to the patient, he states that he does occasionally have thoughts of wishing he was dead, but he has not had any specific plan. The ankle ends up being less concerning, and you now wonder: “Is this patient safe to go home?” You consider what steps you should take to ensure his safety...

The third patient is an 82-year-old woman whose family is concerned that she is depressed. When asking her about her mood, she states that she feels “really sad.” She has a history of hypothyroidism and medication noncompliance, hence the medication refill. You wonder whether the clinical presentation could be due to her thyroid disease, and if there is anything that needs to be done in the ED...

Mental-health-related chief complaints, including substance abuse, account for nearly 12.5% of emergency department (ED) visits.1 Emergency clinicians see a broad range of mental health complaints and play a critical role in the management of psychiatric emergencies, with mood disorders being the most common (42.7%), followed by anxiety disorders (26.1%), and alcohol-related conditions (22.9%).1 Data from the United States Public Health Service show that, annually, nearly 650,000 individuals are evaluated in EDs for suicide attempts, with a population-based annual rate ranging from 163.1 to 173.8 per 100,000.2,3

Evaluating and treating depression in the acute care setting presents numerous challenges for providers. For example, in the ED, depression may manifest in seemingly unrelated somatic complaints, such as unexplained chest pain.4,5 Research has shown that, among adults presenting to an urban ED for acute, unexplained chest and somatic complaints, approximately 23% met criteria for a major depressive episode.6 Sociocultural differences among ethnic groups may cause symptoms of depression to manifest in different ways, making recognition difficult. Similarly, among the elderly, signs of depression can be misinterpreted as early dementia (and vice versa), making the detection of depression challenging.7,8

This issue of Emergency Medicine Practice provides an ED-focused approach to assessing depression and suicide risk. Background information is provided regarding the classification, epidemiology, and known pathology of depression, as well as suicide risk within depression. Best-practice recommendations are made regarding evaluation and current management strategies along with cutting-edge interventions and approaches.

The primary references and articles for this review were collected from Ovid MEDLINE®, Web of Science, Cochrane Database of Systematic Reviews, Google Scholar, and PubMed. A search of PubMed was performed through March 2019 using the terms depression, suicide, suicidal ideation, depression in the emergency department, behavioral emergencies, psychiatric emergencies, biology of depression, depression treatment, suicide attempt treatment, suicide, and emergency department. A guideline search identified a recent clinical policy on the evaluation of the psychiatric patient in the ED.9 A Cochrane review of depression revealed nearly 572 review summaries, 87 of which were relevant to this article. There are also 2 excellent narrative review papers on suicide and depression in the ED.10,11

1. “The patient often comes to our ED intoxicated and leaves when he's sober. I thought he was just drunk and wanted to sleep.”

Patients who make frequent visits to the ED often get broadly overlooked. There is an increased incidence and prevalence of suicide and depression among individuals with substance abuse issues; it is critical to review the vital signs and perform a safety assessment for these patients and re-evaluate when they are sober.

4. “She kept on talking about how her chest hurt, and she never mentioned anything about being depressed or suicidal.”

Depression is a complex condition that often manifests in both cognitive as well as physical/ psychomotor symptoms. Physical ailments such as chest pain and abdominal pain have been found to be among the most common symptoms reported by depressed patients when presenting to their healthcare providers. Maintain a high index of suspicion for depression.

8. “The patient said he just wanted a prescription for a few anxiolytics to calm down.”

Prescribing large amounts of anxiolytics for patients with acute depressive symptoms is challenging, given the risk for intoxication as well as poor follow-up. Ideally, medications should be prescribed in collaboration with the patient’s outpatient psychiatrist/primary care provider to ensure follow-up as well as appropriateness. 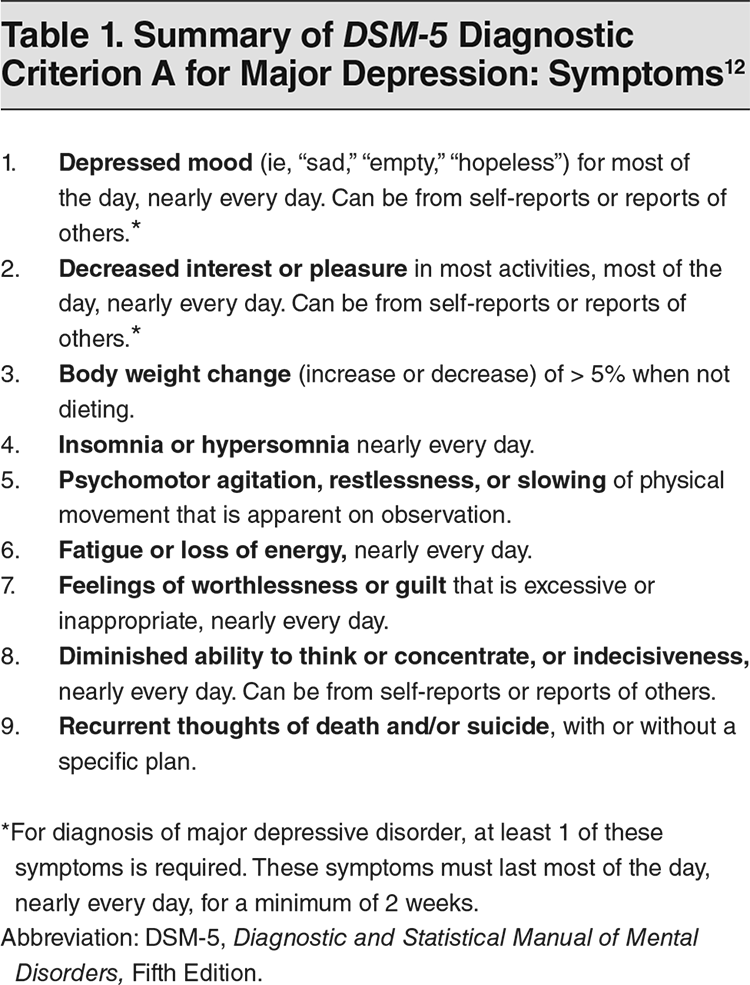