The PAINAD scale is used to assess pain in patients with dementia. The CPOT rates pain in critically ill patients by using clinical observations. The COWS is used to quantify the severity of opiate withdrawal.

The PAINAD scale is used to assess pain in patients with dementia. 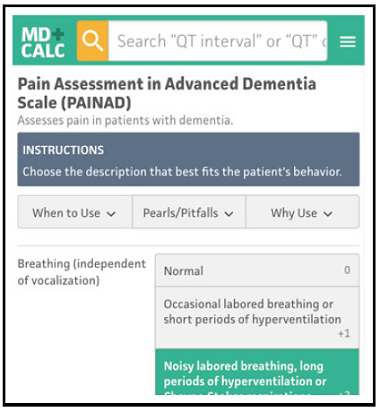 It is difficult to assess pain in patients with advanced dementia; the use of a validated pain scale can help with such assessments.

As with pain management in general, pain in patients with advanced dementia should be assessed serially, and analgesic doses should be titrated accordingly.

Analgesic medications should be used judiciously in patients with dementia, guided by the goals of care expressed by the patient or the patient’s proxy or surrogate.

The PAINAD scale was created by Warden et al (2003) in a study that observed 19 patients in an inpatient dementia special care unit at a Veterans Administration Medical Center. Each patient was assessed and scored by the principal investigator and 2 other raters who were drawn from a pool of 6 raters. Adequate levels of interrater reliability were found between each dyad. The PAINAD scale correlated well with the Discomfort Scale–Dementia of Alzheimer Type, and there was a statistically significant decrease in PAINAD scores after administration of analgesics.

The PAINAD scale was validated in a study of 25 elderly patients who were hospitalized for surgical repair of hip fractures (DeWaters 2008). Twelve of the patients were cognitively impaired and 13 were cognitively intact. The PAINAD scale was positively correlated with a self-reported pain scale, demonstrating concurrent validity, and PAINAD scores were higher when patients were likely to experience pain than when unlikely, demonstrating discriminant validity.

Mosele et al (2012) prospectively validated the PAINAD scale using evaluations of 600 patients who were admitted consecutively to the acute geriatric section at the University of Padua in Italy. The PAINAD scale was shown to be internally reliable and had better concurrent validity and interrater reliability than a self-reported numerical rating scale. 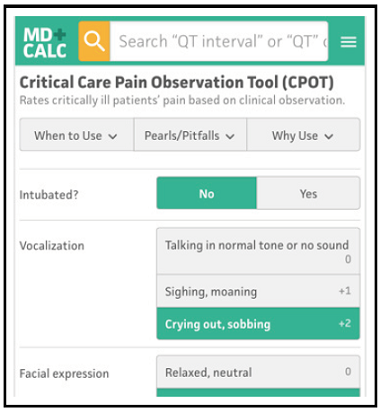 It is estimated that up to 71% of patients in the ICU experience untreated pain (Gélinas 2007). The Society of Intensive Care Medicine recommends routine monitoring of pain in ICU patients. Treatment of pain is associated with fewer days on mechanical ventilation, fewer infections, and increased patient satisfaction.

The CPOT uses objective findings to rate the pain of patients who are unable to report pain levels themselves. The CPOT has good interrater reliability in multiple studies and high sensitivity when patients are in pain.

Regular re-evaluation of a patient’s pain is crucial to appropriate pain management.

Elements of the CPOT were developed using a chart review of 52 critically ill patients, along with focus groups of nurses and physicians (Gélinas 2004). The relevance of inclusion criteria was validated with 4 physicians and 13 critical care nurses using a Likert scale, with content validity indices of 0.88 to 1.0 (Gélinas 2006). The validation study included a cohort of 105 patients, who were each tested 3 times during 3 periods, for a total of 9 tests. The tests were performed 1 minute before, during, and 1 minute after a positioning procedure. Exclusion criteria included heart transplant, thoracic aortic aneurysm repair, medical management of chronic pain, ejection fraction < 25%, psychiatric illness or neurologic problems, alcohol or drug dependence, use of postsurgical neuromuscular blockers, and surgical complications (eg, hemorrhage, delirium). Interrater reliability was high (kappa = 0.62-0.88) for all testing periods except for the fourth test (kappa = 0.52).

The COWS is used to quantify the severity of opiate withdrawal. 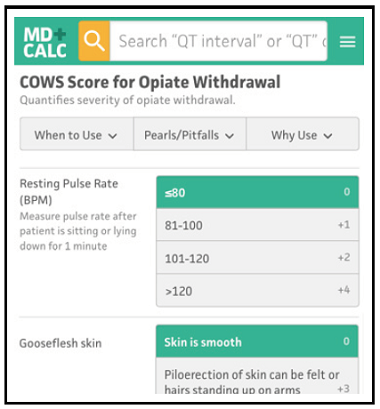 Why and When to Use

The COWS combines subjective and objective components, limiting the possibility of feigned responses. It can be serially administered to track changes in the severity of opioid withdrawal symptoms over time or in response to treatment.

Clinicians should always consider the possibility of comorbid withdrawal conditions from alcohol, benzodiazepines, or sedative-hypnotics, which may be life-threatening alone or in combination.

Prior to buprenorphine induction, patients should already be in moderate to severe opioid withdrawal (equivalent to a COWS score ≥ 8), as buprenorphine is a partial opioid agonist that can precipitate florid opioid withdrawal if administered to a physically dependent patient. Clinicians should be aware of this important criterion in order to prevent patients from experiencing precipitated withdrawal, which is a rapid and intense onset of withdrawal symptoms initiated by the medication. Self-reported “time since last opioid use” is not reliable because patients are not always accurate in reporting their last use, and metabolism varies from patient to patient.

The COWS was first published in a training manual for buprenorphine treatment (Wesson 2003). The scale consists of an 11-item rating system, designed to be completed within 2 minutes by a trained observer, to track opioid withdrawal (as dif-ferentiated from opioid toxicity) using serial assessments. It was designed to be administered quickly and to improve on existing assessment tools.

Tompkins et al (2009) validated the COWS in comparison to the validated Clinical Institute Narcotic Assessment scale. The study used a double-blind randomized design to compare opioid withdrawal symptoms for intramuscularly administered naloxone versus placebo in 46 patients with opioid dependency. The COWS and Clinical Institute Narcotic Assessment scores were well correlated during the naloxone challenge session, with a Pearson correlation coefficient of 0.85 (P < .001), while the placebo was not associated with any significant elevation in either score. Additional evidence of concurrent validity was provided by comparing COWS with the self-reported visual analogue scale; COWS scores correlated well with peak visual analogue scale scores of bad drug effect (r = 0.57, P < .001) and feeling sick (r = 0.57, P < .001). Cronbach’s alpha for the COWS was 0.78, indicating good internal consistency.

Procedural Sedation and Analgesia in the Emergency Department (Pharmacology CME)