A number of concerns have been raised regarding the advisability of the classic principles of aggressive crystalloid resuscitation in traumatic hemorrhagic shock. This issue reviews the advances that have led to a shift in the emergency department (ED) protocols in resuscitation from shock state, including recent literature regarding the new paradigm for the treatment of traumatic hemorrhagic shock, which is most generally known as damage control resuscitation (DCR). Goals and endpoints for resuscitation and a review of initial fluid choice are discussed, along with the coagulopathy of trauma and its management, how to address hemorrhagic shock in traumatic brain injury (TBI), and new pharmacologic treatment for hemorrhagic shock. The primary conclusions include the administration of tranexamic acid (TXA) for all patients with uncontrolled hemorrhage (Class I), the implementation of a massive transfusion protocol (MTP) with fixed blood product ratios (Class II), avoidance of large-volume crystalloid resuscitation (Class III), and appropriate usage of permissive hypotension (Class III). The choice of fluid for initial resuscitation has not been shown to affect outcomes in trauma (Class I).

In the middle of your Saturday overnight shift, you are called to see a patient who drove himself to the hospital with a stab wound to the left upper back. This 19-year old male states that he was on the way to church when he was accosted by “2 dudes” who stabbed him “out of the blue.” He said he may have run into something with his car while trying to get away from them. You find the patient awake, but sluggish. He is speaking and his airway appears patent. Breath sounds are equal bilaterally. The patient’s initial vital signs are: heart rate of 140 beats per minute, blood pressure of 80/50 mm Hg, respiratory rate of 20 breaths per minute, temperature of 97°F (36.1°C), and SpO2 of 100% on room air. He reports only the single injury and when he is fully undressed, no other signs of trauma are found. Peripheral pulses are palpable, and on close inspection, the wound appears to be bleeding only minimally. The trauma surgeon is notified and is en route to assist. Initial FAST examination is negative. Two 18-gauge IVs are placed, lab work is drawn, and 2 L of lactated Ringer solution are administered. The blood pressure rapidly rises to 110/75 mm Hg, and the patient starts to complain of shortness of breath. Chest x-ray reveals a large hemothorax, and the patient’s blood pressure drops to 75/55 mm Hg. You begin to wonder if your initial resuscitation is really helping this patient.

About 50 minutes later, EMS arrives with a pedestrian struck by a car. EMS states that this 24-year-old male was the victim of a hit-and-run accident in which the driver apparently backed over him after first clipping him with the car and knocking him to the ground. When you walk into the patient’s room, you find him awake and angry, complaining of pain in his right upper quadrant. He is on a backboard, wearing a cervical collar, and has obvious bruising to the right chest and abdomen. His airway is patent and his breath sounds are equal bilaterally. The patient’s initial vital signs are: heart rate of 125 beats per minute, blood pressure of 120/80 mm Hg, respiratory rate of 20 breaths per minute, temperature of 98°F (36.6°C), and SpO2 of 94% on room air. Per EMS, the patient was hypotensive on their arrival, with initial blood pressure of 80/40 mm Hg, but it rapidly improved with 2 L of crystalloid given in the field. A second large-bore IV is placed and labs are drawn. The FAST examination reveals significant hemoperitoneum. He then becomes diaphoretic, and repeat blood pressure is now 75/40 mm Hg. The nurse asks if you want 2 more liters of crystalloid…

Resuscitation from shock state is a central part of emergency medicine practice. For many years, the gold standard of treatment was the rapid restoration of circulating volume with crystalloid solutions to normal, or even supraphysiologic, levels. Research over the past 30 years has yielded significant improvements in the treatment of various etiologies of shock, including the treatment of septic shock, using variations on early goal-directed therapy first described by Rivers et al.1 However, all types of shock are not the same, and different etiologies require different approaches. Intravascular losses that result from third spacing, as in sepsis or pancreatitis, are primarily water and electrolytes. Aggressively replacing these losses with crystalloid before irreversible damage occurs makes perfect sense. In contrast, losses from hemorrhage include water, electrolytes, colloids, clotting factors, platelets, and blood cells. Additionally, there are inflammatory and immune responses to hemorrhage and tissue injury that result in third spacing, causing further losses. The complexity inherent in the management of these losses is just now beginning to be understood.

This issue of Emergency Medicine Practice focuses on advances in knowledge that should fundamentally change how we treat trauma patients in hemorrhagic shock. The best available evidence from the literature suggests that we must shift away from the paradigms that have guided emergency clinicians in the past. The following questions provide a guide to the changing landscape:

Current standard resuscitation methods are probably appropriate for more than 90% of trauma patients.2 This review is primarily intended to address the needs of the most critically injured patients who are in hemorrhagic shock. Even in the largest civilian academic trauma centers, these patients are uncommon, constituting only 1% to 2% of all trauma presentations.2 Nonetheless, since hemorrhagic shock is a leading preventable cause of death, implementation of effective treatment strategies for this small population can improve overall trauma survival.

A search of PubMed was carried out using the following combinations of key words: hemorrhagic shock, fluid management, shock, resuscitation, hypertonic saline, trauma-hemorrhage, damage control resuscitation, trauma, and coagulopathy. More than 300 articles were reviewed, which provided the background for further literature review. The Cochrane Database of Systematic Reviews was also consulted, and the combination of these resources served as the foundation of this evidence-based review. Until recently, research in the treatment of hemorrhagic shock was of questionable quality, limited to animal data, or driven by expert opinion. Particularly in the United States (US), there are significant difficulties in conducting randomized controlled trials with trauma patients where consent is not readily available and who may be part of a vulnerable population. As a result, the only Level I evidence reviewed in this article is from abroad. 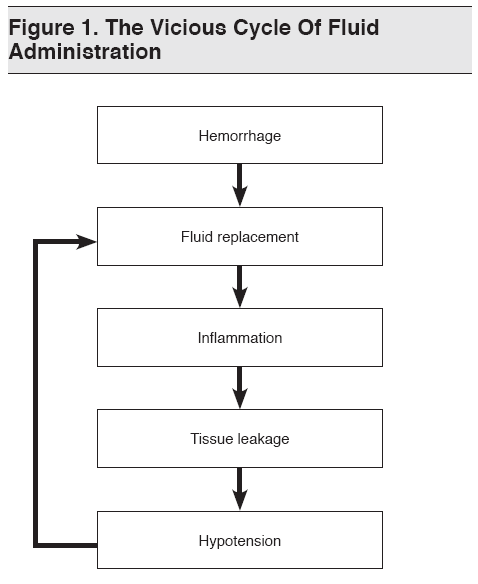