The Alvarado score for acute appendicitis predicts the likelihood of a diagnosis of appendicitis, The shock index may be a more sensitive indicator of occult shock than heart rate or blood pressure alone, especially in patients with trauma or acute hemorrhage.

The Alvarado score for acute appendicitis predicts the likelihood of a diagnosis of appendicitis. 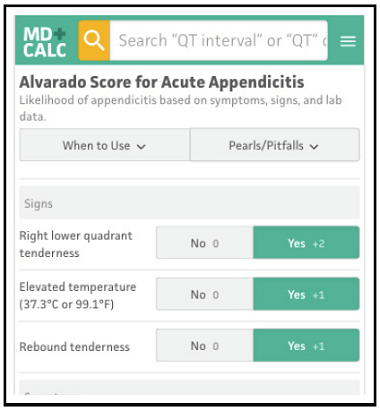 Acute appendicitis is a common surgical emergency in the United States. Diagnostic accuracy for appendicitis is increased with the use of CT scanning; however, there are risks and disadvantages associated with CT scans, including radiation exposure, contrast-related complications, and cost. The Alvarado score is a well-established and widely used clinical decision tool that may help reduce the need for CT scans in diagnosing appendicitis.

The Alvarado score can be used for patients with suspected acute appendicitis (typically, patients presenting with right lower quadrant pain).

Clinicians should use clinical judgment in nonclassic presentations of appendicitis.

The Alvarado score was initially described in 1986 by Dr. Alfredo Alvarado in a retrospective study at a single center in Philadelphia. In 305 patients aged4 to 80 years, 8 predictive factors were identified to stratify the risk of acute appendicitis. Increasing scores were found to correlate with increasing risk for appendicitis, as determined by final surgical pathology.

In 2007, McKay et al studied a retrospective cohort of 150 patients (aged ≥ 7 years) presenting with abdominal pain, with the aim of stratifying risk specifically for the use of computed tomography (CT) scanning for diagnosis. They found 35.6% sensitivity for appendicitis based on equivocal Alvarado scores (defined as scores of 4-6) compared with 90.4% sensitivity based on CT scan in this group. They concluded that patients with equivocal scores would benefit from CT scanning.

Similarly, Coleman et al (2018) conducted a retrospective review in which the Alvarado score was applied to a cohort of 492 patients (median age = 33 years), and found that 20% of the patients were in either the high-risk group (defined as scores ≥ 9 in men or a score of 10 in women) or the low-risk group (scores ≤ 1 in men and ≤ 2 in women). These patients spent a cumulative total of > 170 hours awaiting CT scanning that was ultimately unnecessary. The authors found that scores of 0 or 1 had 0% incidence of acute appendicitis and that 100% of men with a score ≥ 9 and 100% of women with a score of 10 had acute appendicitis confirmed on surgical pathology.

Pogorelić et al (2015) prospectively studied 311 pediatric patients and applied both the Alvarado score and the pediatric appendicitis score (Samuel 2002). Receiver operating characteristic analysis showed similar accuracy between the scores, with area under the receiver operating characteristics of 0.74 (95% confidence interval, 0.66-0.82) for the Alvarado score and 0.73 (95% confidence interval, 0.65-0.81) for the pediatric appendicitis score. The authors concluded that the scores may be useful in emergency settings, but neither score is superior to the clinical gestalt of a pediatric surgeon.

The shock index may be a more sensitive indicator of occult shock than heart rate or blood pressure alone, especially in patients with trauma or acute hemorrhage. 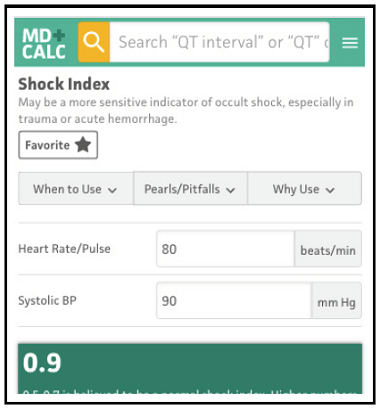 Blood pressure and heart rate, when used individually, fail to predict accurately the severity of hypovolemia and shock in major trauma. Massive transfusion of blood products can be associated with significant risk when initiated on the wrong patient. Identifying patients who are likely to require massive transfusion can be difficult, and objective measures such as the shock index can help. The shock index has also been shown to be more sensitive than the ABC (assessment of blood consumption) score for massive transfusion (Schroll 2018).

Clinicians should consider using the shock index in the following scenarios:

The shock index has been found to be as sensitive as the SIRS criteria to identify patients at risk for sepsis (Berger 2013). However, a large randomized controlled trial showed that use of the shock index to guide fluid resuscitation in sepsis did not demonstrate an improvement in mortality (Yearly 2014).

The accuracy of the shock index for identifying trauma patients in need of massive blood transfusion has not yet been prospectively investigated.

The shock index was first proposed in the literature in 1967 by Allgöwer and Burri as a measure of shock severity. More recently, the shock index has been studied futher with modern protocols.

In a large retrospective study by Mutschler et al (2013), 21,853 patients were identified in a trauma registry. Each patient’s shock index value was calculated based on vital signs taken on arrival at the emergency department. The degree of shock was found to correlate with increasing shock index values. The need for blood products, fluids, and vasopressors was also found to increase with higher shock index values.

A retrospective study by Cannon et al (2009), performed at a single Level I trauma center, identified 2445 patients admitted over a 5-year period. Patients with a shock index value > 0.9 were found to have a significantly higher mortality rate (15.9%) when compared with patients with a normal shock index (6.3%)

In a retrospective registry study by Vandromme et al (2011), the authors identified 8111 patients with blunt trauma who were admitted at a single Level I trauma center over an 8-year period. The shock index value for each patient was calculated from recorded prehospital vital signs, and patients with a shock index value > 0.9 were found to have a 1.6-fold higher risk for massive transfusion.

A retrospective study of 2524 patients at a single center who were screened for severe sepsis found that a shock index value ≥ 0.7 performed as well as the SIRS (systemic inflammatory response syndrome) criteria in negative predictive value and was the most sensitive screening tool for hyperlactatemia and 28-day mortality (Berger 2013).

Of note, in the ProCESS (Protocolized Care for Early Septic Shock) trial (a large, multicenter prospective randomized controlled trial that enrolled 1341 patients), the investigators compared 3 different protocols for resuscitation of septic patients, including a protocol that used a shock index value ≥ 0.8 as a fluid resuscitation goal; the study found no significant difference in mortality between the 3 intervention groups (Yearly 2014).

Emergency Department Management of Patients With Complications of Bariatric Surgery