The Injury Severity Score (ISS) standardizes the severity of traumatic injury based on the 3 worst injuries from 6 body systems, The Pediatric Trauma Score (PTS) stratifies the severity of injury and mortality risk in pediatric trauma patients, and The Glasgow Coma Scale (GCS) assesses impairment in a patient's level of consciousness using eye, verbal, and motor criteria.

The Injury Severity Score (ISS) standardizes the severity of traumatic injury based on the 3 worst injuries from 6 body systems. 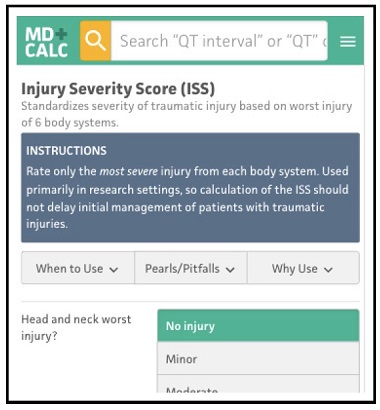 Why and When to Use and Next Steps

Due to the heterogeneous nature of trauma patients, standardizing the severity of traumatic injuries allows for comparison of much larger sample populations in trauma research studies.

The ISS attempts to standardize the severity of injuries sustained during trauma. This standardization allows for more accurate study and prediction of morbidity and mortality outcomes after traumatic injuries.

As the ISS is intended primarily as a research tool, the score should not affect the initial management of a patient with traumatic injuries.

The ISS is used primarily in research settings, so calculation of the score should not delay initial management of patients with traumatic injuries.

The ISS was derived by Baker et al (1974) by taking the previously used AIS (American Medical Association Committee on Medical Aspects of Automotive Safety 1971) and adding the squared value of each of the 3 most severely injured body systems, in an effort to add increasing importance to the most severe injuries. The top 3 most severe injuries were used to calculate the final score because it had been shown that injuries that would not necessarily be life-threatening in isolation could have a significant effect on mortality when they occurred in combination with other severe injuries. The derivation study included only injuries sustained from motor vehicle collisions, including the occupants of the vehicles and any pedestrians involved.

In a study of 8852 trauma patients from the Illinois Trauma Program (including both vehicular and nonvehicular trauma), Semmlow et al (1976) had similar findings to Baker et al regarding the relationship between ISS and mortality. They also found that the ISS correlated with hospital length of stay. 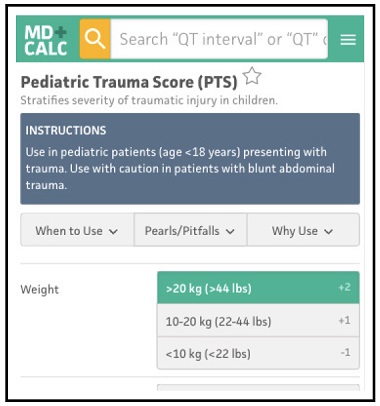 Why and When to Use and Next Steps

The PTS helps clinicians stratify injury severity and mortality risk in pediatric trauma patients. It can also be used to triage patients in a resource-limited environment, identifying the patients who are at high mortality risk versus patients who may not be as critically ill and will need fewer resources.

The PTS can be used for triage by first responders on the scene to help determine which patients require transfer to a pediatric trauma center.

Patients should be monitored for any evolution of signs and symptoms, as conditions may change after the initial assessment and scoring with the PTS.

A low PTS correlates with high mortality risk, so a patient with a low score should be triaged for immediate medical attention at a pediatric trauma center (if nearby) or for stabilization at the nearest medical facility, at the discretion of the first responder.

Patients who have higher scores are less likely to have significant morbidity and mortality, but require reassessment as symptoms evolve. These patients should still be evaluated by a clinician, and a complete history and physical examination should be performed.

Reassessment is an essential component of patient care in all trauma cases. Patients who have a low initial PTS, which indicates high risk for morbidity and mortality, may have changes in their clinical status, so recalculation may be necessary. Patients who have a high PTS should not be advised against further medical attention, as evaluation by a clinician is still recommended.

The PTS was first described by Tepas et al (1987) in a matched cohort study comparing 2 groups of 110 and 120 pediatric trauma patients, respectively. The study found a linear relationship between the PTS and the Injury Severity Score (ISS). The authors further validated their findings in a retrospective cohort study that included data for 615 children entered into the National Pediatric Trauma Registry between April and December 1985 (Tepas 1988). This study confirmed the correlation between increasing PTS and increasing ISS. Notably, the study authors did not correlate the findings with mechanism of injury. The study found that a PTS < 0 had a 100% mortality rate and a PTS > 8 was associated with no mortality; patients with a PTS of 0 to 8 had decreasing mortality rates as the PTS increased, showing an inverse linear correlation between increasing severity of injury and decreasing PTS.

Ramenofsky et al (1988) validated these findings in a cohort of 450 injured children who were evaluated by a paramedic in the field and a physician in the emergency department. The study confirmed an inverse linear correlation of PTS with injury severity and found a 93.6% correlation between the 2 clinicians (correlation coefficient = 0.991). A later study (Saladino 1991) found the PTS to be a poor predictor of isolated blunt abdominal injuries (eg, liver and spleen). 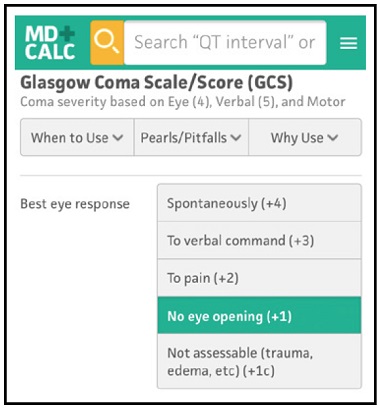 Why and When to Use, Next Steps, and Advice

The GCS is an adopted standard for mental status assessment in the acutely ill trauma and nontrauma patient and assists with predictions of neurological outcomes (complications, impaired recovery) and mortality.

The GCS is designed for use in serial assessments of patients with decreased mental alterness from either medical or surgical causes and is widely applicable. It is commonly used in the prehospital and acute-care setting as well as over the course of a patient's hospitalization to evaluate for mental status in patients with either traumatic or nontraumatic presentations.

For children who are preverbal or aged ≤ 2 years, use the Pediatric Glasgow Coma Scale

Although it has been adopted widely and in a variety of settings, the GCS score is not intended for quantitative use. Clinical management decisions should not be based solely on the GCS score in the acute setting.

The modified GCS (the 15-point scale that has been widely adopted, including by the original unit in Glasgow, as opposed to the 14-point original GCS) was developed to be used in a repeated manner in the inpatient setting to assess and communicate changes in mental status and to measure the duration of coma (Teasdale 1974).

In the acute care setting, the GCS has been shown to have highly variable reproducibility and inter-rater reliability (eg, 56% among neurosurgeons in one study, 38% among emergency department physicians in another study). In its most common usage, the 3 sections of the GCS are often combined to provide a summary of severity. The authors themselves have explicitly objected to the GCS being used in this way, and analysis has shown that patients with the same total score can have huge variations in outcomes, specifically mortality. A GCS score of 4 predicts a mortality rate of 48% if calculated 1E + 1V + 2M (for eye, verbal, and motor components, respectively), and a mortality rate of 27% if calculated 1E + 2V + 1M, but a mortality rate of only 19% if calculated 2E + 1V + 1M (Healey 2014).

In summary, the modified GCS provides an almost universally accepted method of assessing patients with acute brain damage. Summation of its components into a single overall score results in information loss and provides only a rough guide to severity. In some circumstances, such as early triage of severe injuries, assessment of only a contracted version of the GCS can perform as well as the GCS and is significantly less complicated. However, contracted scores may be less informative for patients with lesser injuries.

Pediatric Firearm Injuries to the Extremity: Management in the Emergency Department (Trauma CME and Pharmacology CME)