0Log In Subscribe
Read a Free Issue
TOC Will Appear Here
Home > All Topics > Evidence-Based Assessment And Management Of Pediatric Mild Traumatic Brain Injury (Trauma CME)
FREE PREVIEW
This article is available to subscribers.
Already have an account? Log in. Not a subscriber? Subscribe now.

Closed head injury (CHI) resulting in concussion accounts for half a million emergency department (ED) visits annually. Children aged 0 to 4 years and adolescents aged 15 to 19 years are most likely to sustain a traumatic brain injury. There is a 2:1 male-to-female preponderance of mild traumatic brain injury (MTBI) across all ages. Mild traumatic brain injury often presents with symptoms of concussion such as loss of consciousness (LOC), amnesia, confusion, headache, nausea, and vomiting; these symptoms should be evaluated for other potential etiologies. A pediatric Glasgow Coma Scale (GCS) score of 14 or below is concerning for clinically important traumatic brain injury (TBI), and CT scan is recommended. The American Academy of Pediatrics has recommended observation periods of 24 hours in children with CHI; however, with reliable families in close proximity to a hospital and with a well-appearing child, observation may occur at home. 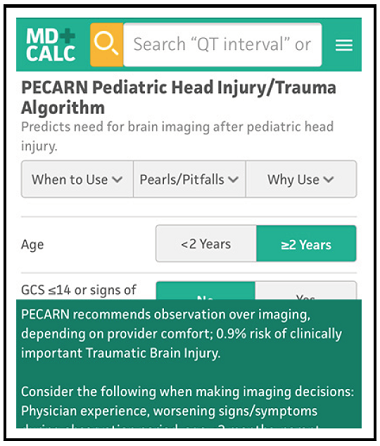 Unlike in the adult population, CT imaging of the head in pediatric patients is believed to be associated with an increased risk of lethal malignancy over the life of the patient, with the risk decreasing with age. The estimated lifetime risk of lethal malignancy from a head CT for a 1-year-old patient is 1 in 1000 to 1500, with risk decreasing to 1 in 5000 for a 10-year-old patient.

There are over 600,000 emergency department visits annually in the United States for head trauma among patients aged ≤ 18 years. Applying the PECARN Pediatric Head Injury Prediction Rule allows providers to determine which pediatric patients they can safely discharge without obtaining a head CT.

For the remaining 4 lower-risk predictors in each cohort, the risk of ciTBI is approximately 0.9% per predictor, and CT imaging is indicated rather than observation. Judgment may be based on clinical experience, single versus multiple findings, signs of clinical deterioration during the observation period, patient age, and/or parental preference.

CT scans were performed at the physician’s dis-cretion in 35.3%, while medical records, telephone surveys, and county morgue records were used to assess for cases of missed ciTBI in those discharged without imaging. The potential for CT reduction quoted above is likely underestimated, given that CT utilization in this study (35.3%) was significantly lower than the estimated average in North American emergency departments (50%).

External validation studies have demonstrated sensitivity of 100% for ciTBI and any injury requiring neurosurgery. The algorithm has reasonable specificity (53%-60%), considering its extremely high sensitivity.

As a result of the infrequency of ciTBI, the lower bounds of the CIs of sensitivity started at 86% and 89%, respectively, for the cohorts aged < 2 years and > 2 years. The NPV CIs very closely approximated 100%.

A second trial at a single United States emergency department of 1009 patients aged < 18 years prospectively compared the PECARN Rule to 2 other pediatric head CT decision aids, CHALICE and CATCH, as well as to physician estimates and physician practice. In this sample, 2% (21/1009) of patients had ciTBI and 0.4% (4/1009) of patients needed neurosurgery. Again, the PECARN Rule was found to be 100% sensitive for identifying ciTBI.

The PECARN Rule outperformed both the CHALICE and CATCH decision aids, which were 91% and 84% sensitive for ciTBI, respectively). Although the goal was to rule out those with very low risk of ciTBI, the PECARN Rule also performed well to rule out TBI on head CT. In patients aged < 2 years, sensitivity and NPV were 100% for TBI on CT, with narrow CIs. In patients aged > 2 years, sensitivity was 98.4% and NPV was 94% for TBI on CT, with relatively narrow confidence intervals.

Another subanalysis of those with isolated vom-iting (eg, no other PECARN predictors) reiterated the parent study results. In the cohort of patients aged > 2 years, there was a low rate of TBI on head CT (3.2%, 26 of 806 patients) and an even lower rate of ciTBI (0.7%, 10 of 1501 patients), so observation rather than emergent imaging is indicated in the majority of these patients. Number of vomiting episodes and timing of episodes was not helpful in predicting ciTBI or TBI on head CT, as there was a non–statistically significant counterintuitive trend towards less ciTBI/TBI on CT with more episodes.

An Evidence-Based Approach To Severe Traumatic Brain Injury In Children