Venomous native North American snake families include the pit vipers (copperheads, water moccasins/cottonmouths, and rattlesnakes) and coral snakes. Pit viper venom is coagulopathic, and coral snake venom is neurotoxic – so what are the differences in ED management between the 2 types of envenomations? This issue reviews the best evidence behind some of the conflicting recommendations, local practices, and “folklore” surrounding snakebites:

Ice, pressure immobilization, incision and suction: are they still recommended?

How can you tell whether - and how much - venom was injected?

What can antivenom do - and not do?

What are the antivenom options for coral snake bites?

When is airway compromise a concern, and will antivenom reverse it?

Is there a greater risk for anaphylaxis from the snakebite or the antivenom?

What is the likelihood of bleeding days or weeks after a snakebite?

What are the different observation time recommendations, based on type of snake and bite severity?

There are approximately 10,000 emergency department visits in the United States for snakebites every year, and one-third of those involve venomous species. Venomous North American indigenous snakes include species from the Crotalinae (pit vipers) and Elapidae (coral snakes) subfamilies. Treatment relies on supportive care, plus antivenom for select cases. While certain principles of management are widely accepted, controversies exist with regard to prehospital use of pressure immobilization, antivenom use, coagulation testing after copperhead envenomation, and fasciotomy. An evidence-based approach to management of North American venomous snakes will be discussed, along with a review of the current controversies.

A 4-year-old boy is brought to your ED by his distraught parents. An hour ago, he was in the backyard by the pool, playing with what they thought was a toy. He started screaming, and when the mother moved closer, she saw a foot-long black, yellow, and red snake in his hand. She frantically pulled it off him and threw it into the bushes. She reports that she had to pull quite hard before it would release. The child has several small marks on the palm of his left hand. There is minimal redness, and no swelling is apparent. The dad took a picture of the snake with his phone and you can tell quickly that it was a coral snake. The child is asymptomatic currently, but the nearest pediatric ICU is over an hour away. You wonder: should you transfer this patient to the ICU or can you observe him in the ED—and should you start antivenom?

A 26-year-old man arrives to the ED via private vehicle with his arm in a makeshift sling. He reports that his pet rattlesnake bit him on his right index finger about 45 minutes ago. His hand and wrist are swollen. He reports that he has no past medical history besides his 3 previous visits for snakebites. He reports having a “reaction” to the snakebite antidote during his last visit. You wonder whether the patient is immune . . . or should you give antivenom again?

A 51-year-old man with a history of a rattlesnake bite approximately 4 days ago presents from his primary care physician's office for abnormal lab test results. He reports easy bruising and some bleeding when he brushes his teeth, but is otherwise asymptomatic. You wonder how you should manage this patient.

According to the American Association of Poison Control Centers (AAPCC) 2006-2015 annual reports, there were 65,695 reported exposures and 31 deaths from snakes in the United States in that time period.1 There are 2 subfamilies of venomous snakes that are native to the United States: (1) the Crotalinae (pit vipers, subfamily of family Viperidae), which includes rattlesnakes, copperheads, and water moccasins (also called cottonmouths), and (2) the subfamily Elapidae (subfamily of family Colubridae) of which only the coral snake is native to the United States. Bites from snakes from these native subfamilies can produce significant morbidity and, rarely, death, so prompt clinical evaluation and management is essential. In addition, exotic snakes are popular as pets, and bites from these snakes may cause rapid death, depending on the species, so expertise is required to manage them expeditiously.

Patients with snake envenomations generally access healthcare either through the emergency department (ED) or through first-aid providers who generally turn to the emergency clinician for direction. Management of envenomations is considered a core competency of emergency clinicians, and along with Poison Control Centers, they often serve as community resources for snakebite emergencies. Not all envenomations require antivenom; however, delayed administration may lead to significant morbidity and even death, in some cases. This issue of Emergency Medicine Practice provides a comprehensive update on the principles of clinical evaluation of envenomations from pit vipers and coral snakes native to the United States as well as current management recommendations and controversies. Resources are also provided to assist in the management of envenomation from exotic species.

A search of literature published from 2006 to 2017 using key terms snake bite or snake envenomation of the Cochrane Database of Systematic Reviews, Evidence Based Medicine Reviews: Best Evidence (ACP), Database of Abstracts of Reviews of Effectiveness (DARE), and Evidence-Based Medicine Reviews Multifile (EBMZ) identified 11 articles. Of these, 3 were not relevant to indigenous North American snakes, 3 were randomized controlled trials, 1 was a poststudy subanalysis, and 2 were reviews (Cochrane and DARE).

As is the case with most of the toxicology literature, evidence on the management of snake envenomations from high-quality prospective randomized controlled trials is limited. The few published studies in the past 10 years are mostly from other countries where the snake species, the level of supportive care, and antivenom availability and effectiveness are different from that in North America. The literature is comprised primarily of case reports/series, retrospective chart reviews, animal model studies, expert consensus panels, and review articles.

The current relevant literature is comprised of case reports/series describing novel or known but not well-characterized clinical effects after a snake envenomation; observational studies using data from hospital charts, Internet search, Poison Control Centers, and national databases; animal model studies; in vitro venom and antivenom studies; conclusions from expert consensus panels; a position statement; and 3 randomized controlled trials. Many of the retrospective observation studies utilized Poison Control Center data (Texas Poison Control Center Network, Florida Poison Information Center Network, AAPCC database, and the American College of Medical Toxicology ToxIC North American Snakebite Registry). Poison Control Centers collect self-reported, unverified information provided by the public or healthcare workers on potential or actual exposures, but they may not be true envenomations and may not reflect the true incidence of snakebites. Furthermore, reported clinical effects and outcomes may be incomplete or inaccurate. For example, according to a compilation of data reported to United States Poison Control Centers, there were no deaths from coral snakes from 2006 to 2015; however, a confirmed death after a coral snake envenomation was published in 2009 (the first and only confirmed death in the literature).2 The ToxIC Registry contains prospectively collected verified clinical information, and it also relies on voluntary reporting.

Most of the management recommendations discussed in this article are based on expert opinion supported by low- to moderate-quality evidence. Expert consensus panel recommendations for the surgical management of snake envenomation were published in 2013.3 Clinical questions were structured in the “Patient, Intervention, Comparison, Outcome” format, and recommendations were developed using Grading of Recommendations, Assessment, Development, and Evaluation. A unified treatment algorithm for the management of Crotalinae envenomations was published in 2011.4 Experts utilized a modified Delphi methodology to develop evidence-informed recommendations. Standard evidence-level scales were not used, as only 1 randomized clinical trial involving the treatment of Crotalinae envenomation with antivenom had been published at the time.5 Since then, a randomized clinical trial comparing Crotalidae Polyvalent Immune Fab (Ovine) (FabAV, CroFab®) to F(ab’)2 immunoglobulin derivatives was published in 2015.6 Additionally, a post hoc analysis of data from this trial comparing copperhead coagulation parameters was also published.7 A position statement from leading national and international clinical toxicology associations regarding use of pressure immobilization after a North American Crotalinae snake envenomation was published in 2011.8

1. “The patient had some minor abrasions, but no visible fang marks, pain, or swelling at the bite site, so I discharged him.”

Patients can develop a coagulopathy and covert bleeding from pit viper bites without having visible tissue damage. The patient should be observed for a minimum of 8 hours, and coagulation studies repeated before discharge home. Coral snake bites may not produce any visible signs on examination. If a coral snake is the suspected culprit, the patient should be monitored for 24 hours to ensure delayed symptoms do not develop.

3. “I thought that I could wait until signs of respiratory distress developed, because the antivenom would quickly reverse the paralysis.”

Administration of antivenom does not reverse symptoms; it merely halts progression of symptoms. Patients with coral snake bites should be treated with antivenom at the first signs of neurological impairment.

7. “The patient had urticaria and wheezing that developed soon after I started administering antivenom, so I stopped the infusion. The patient continued to worsen, even though I stopped it.”

Allergic reaction to antivenom is a serious adverse effect; however, patients can also develop anaphylaxis and other allergic symptoms to snake venom. For each case, consider this possibility and weigh the risks of not treating a snakebite. Consultation with a regional Poison Control Center is recommended. 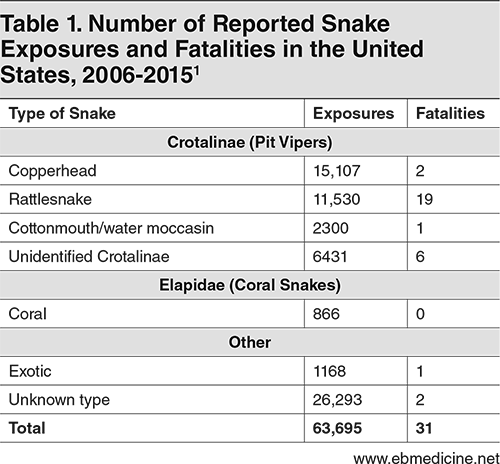 Identification and Management of Marine Envenomations in Pediatric Patients