You arrive for your shift in the ED. The final patient you are signed out is a 30-year-old woman with lower abdominal pain whose ultrasound results are pending to rule out torsion versus ovarian cyst. You nod dutifully and go about seeing new patients. An hour into the shift, the clerk hands you the ultrasound results with the radiologist’s impression: “No radiological etiology of patient’s abdominal pain is found.” You review the chart and confirm that there is no concern for any nongynecological etiologies for her pain. The previous physician documented mild left adnexal tenderness without cervical motion tenderness or adnexal masses. Labs are notable for a urinalysis that is small leukocyte esterase positive and nitrite negative, and a wet mount without clue cells, yeast, or Trichomonas vaginalis. You confirm the documented history with the patient, who additionally denies any urinary complaints or flank pain. On your physical examination, you note only mild left lower abdominal tenderness. As the patient asks, “Why am I having this pain? Can I just go home?” you wonder if there is something else you should do.

A 22-year-old woman returns for re-evaluation 1 week after starting treatment for pelvic inflammatory disease. She does not have access to primary care and was instructed to return to the ED for repeat evaluation. She was supposed to return to the ED after 2 days, but could not because of work. She continues to complain of nonspecific left lower abdominal pain. She states that the pain may be a bit more intense, but it has not changed in quality, position, or associated features. On your physical examination, the patient has left lower quadrant abdominal tenderness without guarding or rebound. Bimanual examination reveals only mild left adnexal tenderness without a palpable mass. She states that she has been fully compliant with the doxycycline and has not had intercourse since her diagnosis. Her previous records show a negative pelvic ultrasound, urinalysis, urine culture, and HIV test. You are surprised to find that her gonorrhea/ chlamydia nucleic acid amplification test from a cervical specimen showed no evidence of infection. After being told about her negative gonorrhea and chlamydia tests, she asks if she can stop taking the antibiotics…

Pelvic inflammatory disease (PID) is an inflammatory disease of the upper female reproductive system that is caused by an ascending infection. It is characterized by inflammation and tenderness of the uterus, cervix, and adnexa. PID is common and costly, with a yearly incidence of 750,000 to 800,000 cases and $2 billion in annual direct costs in the United States.1,2 The majority of patients with PID present with mild-to-moderately severe disease and are managed as outpatients.3 Only a small percentage of patients progress to severe or complicated illness.4 Although the rate of direct morbidity and mortality is low, treatment prevents subsequent infertility, pelvic scarring, chronic pelvic pain, and ectopic pregnancy.5

PID can be a difficult and frustrating diagnosis; patients commonly present with nonspecific symptoms such as vaginal discharge, postcoital bleeding, dyspareunia, and dysuria.6 There is no single historical, laboratory, physical examination finding, or imaging modality that provides adequate sensitivity or specificity for the diagnosis.7-10

The United States Centers for Disease Control and Prevention (CDC) recommend that clinicians make the clinical diagnosis of PID and start empiric treatment in sexually active women with unexplained lower abdominal or pelvic pain with:

There are no requirements for any specific laboratory findings, physiological parameters, or imaging.11 While this definition may seem overly broad, it has a sensitivity of > 95% and a specificity of 75% and reflects the need to minimize the rates of misdiagnosis and prevent the resulting impact on fertility.8 This issue of Emergency Medicine Practice presents a review of the current evidence and best-practice guidelines of the evaluation and treatment of PID.

References from articles were examined to ensure accurate representation of the literature. The recommendations for the first-line treatment, management, and diagnostic evaluation are based on multiple well-performed studies with large sample sizes that looked at both short- and long-term outcomes; however, the bulk of the remaining literature suffers from sampling bias toward sicker patients, which affects generalizability of findings, and focuses on shorter-term outcomes instead of the longer-term outcomes that comprise the bulk of the morbidity associated with PID. These biases make it difficult to make high-level recommendations regarding alternative treatments and management. 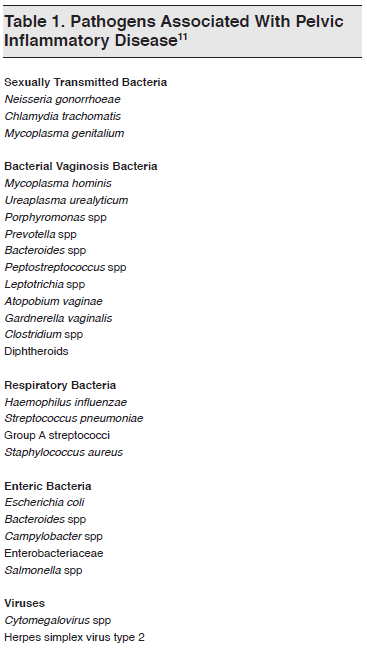 To help the reader judge the strength of each reference, pertinent information about the study is included in bold type following the reference, where available.

Evaluation and Management of Patients With Pharyngitis in Urgent Care

Identification and Management of Adolescent Gynecologic Emergencies in the Emergency Department