Spontaneous intracerebral hemorrhage is a true neurological emergency, and its management is made more complicated when patients are anticoagulated, as reversal of anticoagulation must be initiated simultaneously with diagnosis, treatment, and disposition. Recent advances such as newer laboratory testing and rapid computed tomography for diagnosis, blood pressure reduction to reduce hematoma expansion, and new anticoagulant reversal agents may allow for improved outcomes. Management of intracranial pressure is particularly important in anticoagulated patients, as is identifying patients who may benefit from rapid neurosurgical intervention and/or emergent transport to facilities capable of managing this disease.

Immediately upon walking into your evening shift, a nurse gets your attention and instructs you to see a patient that she is concerned is having a stroke. The patient is a 78-year-old man with a history of congestive heart failure and a mechanical heart valve who has had 2 hours of headache and dysarthria. His family reports that he had no deficits prior to this. You immediately order a head CT, which demonstrates a small right parietal lobe bleed. The INR returns at 4.0 and you notice in the chart that the patient had a recent echocardiogram with an ejection fraction of 15%. You wonder how well he will tolerate reversal and what should be done about his blood pressure, which is 175/105 mm Hg.

Your second patient is a 65-year-old woman with atrial fibrillation. Her cardiologist put her on dabigatran, and she has been compliant with her medications. Today, she developed a headache and left-sided weakness approximately 1 hour prior to arrival. She is also taken immediately for a head CT, which demonstrates a 15-cc right thalamic intracerebral hemorrhage and a small amount of bleeding into her lateral ventricles. You wonder what the best strategy is for reversal agents for dabigatran.

Later in your shift, a gentleman who appears to be in his mid-50s is brought in after his family noticed that he was sleepier than usual after returning from the grocery store an hour ago. He has a past medical history of atrial fibrillation, and is anticoagulated on rivaroxaban. On your exam, he keeps falling asleep when you try to talk to him, but with painful stimulation, he wakes up and follows commands. He is taken immediately for an emergent head CT, which demonstrates a 3-cm right cerebellar intracerebral hemorrhage. As you step out of the room to speak to the neurosurgeon, the nurse runs out to tell you that the patient has now developed sonorous respirations. As you prepare to intubate the patient, you wonder whether he needs to be hyperventilated and what the best reversal strategy is for rivaroxaban.

Intracerebral hemorrhage (ICH), defined as “bleeding into the parenchyma of the brain that may extend into the ventricles and, in rare cases, the subarachnoid space,”1 is a devastating disease that must be recognized immediately in the emergency department (ED). Unlike ischemic stroke, which has a large body of evidence supporting intravenous tissue plasminogen activator (tPA) and endovascular treatment, ICH has no targeted modalities for treatment.2-7 Anticoagulated patients with ICH require rapid reversal of coagulopathy to limit hemorrhage progression; however, the optimal approach is debated. Despite the fact that there are no targeted therapies in the treatment of ICH, current strategies to improve outcome rest largely on reducing the risk of hematoma expansion early in treatment, as each milliliter of expansion decreases the patient’s chances of living independently.8

ICH accounts for 10% to 20% of all strokes, worldwide.9 Approximately 25% of these patients are on an oral anticoagulant.10-16 Outcome data on ICH are clouded with uncertainty, as the cause of death of many of these patients is withdrawal of care. Nonetheless, ICH has a much higher mortality than ischemic stroke.17 A prospective registry out of Denmark demonstrated that mortality from ICH is significantly higher than in ischemic stroke (hazard ratio [HR], 1.564; 95% confidence interval [CI], 1.4-1.7; P < .001).17 Mortality of ICH at 1 year ranges from 38% to 50%.10,18,19

As the population ages, it is expected that there will be a growing number of patients who are anticoagulated. Oral anticoagulants are most frequently used for stroke prevention in atrial fibrillation or in the treatment of thromboembolic disease, and numerous studies have documented their benefit.20,21 Warfarin prescriptions quadrupled between 1988 and 1999, and the incidence of anticoagulant-associated ICH quintupled.22 It is estimated that over the next 50 years, the prevalence of atrial fibrillation will be 2.5 times greater than it is currently.23 This is reflected in the epidemiology of patients who sustain ICH. Flaherty et al followed a cohort of patients in 1988, and again a decade later. Although the incidence of ICH did not change significantly between the 2 time periods, anticoagulant-associated ICH became more common.19

When patients are on anticoagulants, their risk of ICH and associated morbidity and mortality increases significantly.24 In a retrospective study of patients with ICH, mortality was 67% in anticoagulated patients versus 55% in those not anticoagulated.25 ICH volume was also statistically larger compared to the nonanticoagulated group.25 An international normalized ratio (INR) > 3.5 nearly doubles the risk of a fatal ICH in patients who are on warfarin when adjusted for age, sex, cardiovascular disease, diabetes, heart failure, hypertension, and type of ICH.26

Since reversal of coagulopathy is a time-sensitive process, emergency clinicians must appropriately diagnose, manage, and disposition patients with ICH. In 2015, a retrospective study in Germany described patients with ICH who were on oral anticoagulants, and it demonstrated a significant survival benefit in patients who had INR reversal to < 1.3 and systolic blood pressure (SBP) to < 160 mm Hg within 4 hours after presentation.27 The results of this study support the critical role played by the emergency clinician in recognition and man-agement of these acute patients.

A literature search was performed in PubMed with the search terms ICH reversal, ICH warfarin, ICH anticoagulation, and novel oral anticoagulants ICH. A total of 1738 articles from 1947 to the present were identified, 240 abstracts were reviewed, and 16 papers were selected for full review and referenced. The date of the literature search was May 15, 2015, with additional resources reviewed up to November 2015. The Cochrane Database of Systematic Reviews was searched for systematic reviews using the key term intracerebral hemorrhage, and 15 reviews were identified.

Using standard evidence-level scales, the majority of clinical evidence of vitamin K antagonist (VKA)-associated ICH falls into the “strong evidence” categories; however, evidence associated with novel oral anticoagulant (NOAC)-associated ICH falls into the “weak evidence” categories. There are several reasons for this. First, ICH is a rare disease, and properly designed clinical trials are often too resource-intensive to perform. Second, NOACs have not been available for sufficient time to quantify the extent of their use within the population and their impact on the clinical evaluation and treatment of ICH. When available, recommendations in this article are evidence-based. Recommendations based on accepted practice or expert consensuses are explicitly noted as such.

The overall strength of evidence supporting correction of coagulopathy in the setting of ICH by replacing appropriate factors or platelets in the setting of severe coagulation factor deficiency or severe thrombocytopenia is strong, with Class I, Level of Evidence C in the 2015 AHA ICH management guidelines.28 These same guidelines give a Class I, Level of Evidence C to withholding VKAs in VKA-associated ICH, receiving therapy to replace vitamin K-dependent factors and correct the INR, and receiving intravenous vitamin K.28 However, in the setting of NOACs, the most rapid and effective ways to reverse coagulopathy are still under study, and no guidelines describe the best method of reversal. 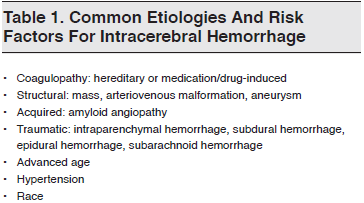 Management of Deep Vein Thrombosis in the Emergency Department