A 53-year-old man with a history of hemoglobin SS (HbSS) sickle cell disease presents with 5 hours of a persistent, painful erection. This is the third time this has occurred in the past 2 years. Prior to presentation, he took pseudoephedrine tablets that were prescribed by his urologist, with no improvement. He denies fevers, chills, or trauma. He appears to be in a moderate amount of pain and his physical examination is notable for a fully erect penis that is tender to palpation, without lesions or discharge. You wonder: How long does it take for irreversible tissue damage to occur?

As you are deciding on your first course of action, the paramedics bring in a 22-year-old man who was just in a bicycle accident. He had a flat tire that caused him to fall on his bicycle, striking his groin on the handle bars. He was wearing a helmet, did not lose consciousness, and has no neck tenderness. His examination is otherwise normal, apart from superficial abrasions to his extremities and a semirigid phallus that is more embarrassing than painful to him. It persists despite his attempts to apply local pressure. After performing a more detailed physical examination, you note that there is some bruising and swelling to his perineum and the base of his penis. His testicles are mildly tender, but the cremasteric reflex is present bilaterally. You note no blood at the meatus. You have never seen anything like this, and you wonder: What are your priorities for the diagnosis and management of this patient?

Genitourinary complaints account for approximately 5% of emergency department (ED) visits in the United States,1 and one of the most serious of these emergencies is a man presenting with priapism.1,2 Priapism is defined as a persistent penile erection that continues hours beyond, or is unrelated to, sexual stimulation.3,4 There are 3 main types of priapism:

Ischemic priapism represents a penile compartment syndrome, thus making it a true emergency requiring rapid intervention. Ischemic changes begin within 12 hours of a maintained erection, beginning with interstitial edema that progresses to denuding of the sinusoidal endothelium and thrombocyte adhesion at 24 hours. After approximately 48 hours, smooth-muscle necrosis occurs, and fibroblast-type cells proliferate.5 After 48 hours of ischemic priapism, 100% of patients develop some level of irreversible fibrosis of the corpus cavernosum that negatively affects their erectile function and can lead to permanent impotence.

The diagnosis and management of priapism is a core competency of the emergency clinician. This issue of Emergency Medicine Practice provides a review of the literature and best-practice recommendations on how to manage this condition and optimize patient outcomes.

A literature search was performed using PubMed and the Cochrane Database of Systematic Reviews with the search terms priapism, ischemic, high flow, stuttering, impotence, and sickle cell. From the Cochrane library, 69 trials involving priapism were identified. A Cochrane review regarding priapism in which only 1 study met inclusion criteria was found,2 and, not surprisingly, no conclusions regarding the benefits and risks of the different treatments for both stuttering and fulminant priapism in males with sickle cell disease could be drawn.9

The majority of literature on priapism consists of case reports, case series of well-established therapies, retrospective chart reviews, and position papers. Both the European Association of Urology (EAU)4 and the American Urological Association Guidelines Committee3 have published practice guidelines based on a panel of expert opinions. Recently, there have been several review articles summarizing treatment guidelines and practice standards.10-13 There are ongoing studies describing experimental therapies for recurrent and fulminant priapism.14 The 2014 EAU guidelines remain the most current and comprehensive literature summary to date; it included 192 review articles, 485 original articles, and 911 case reports. 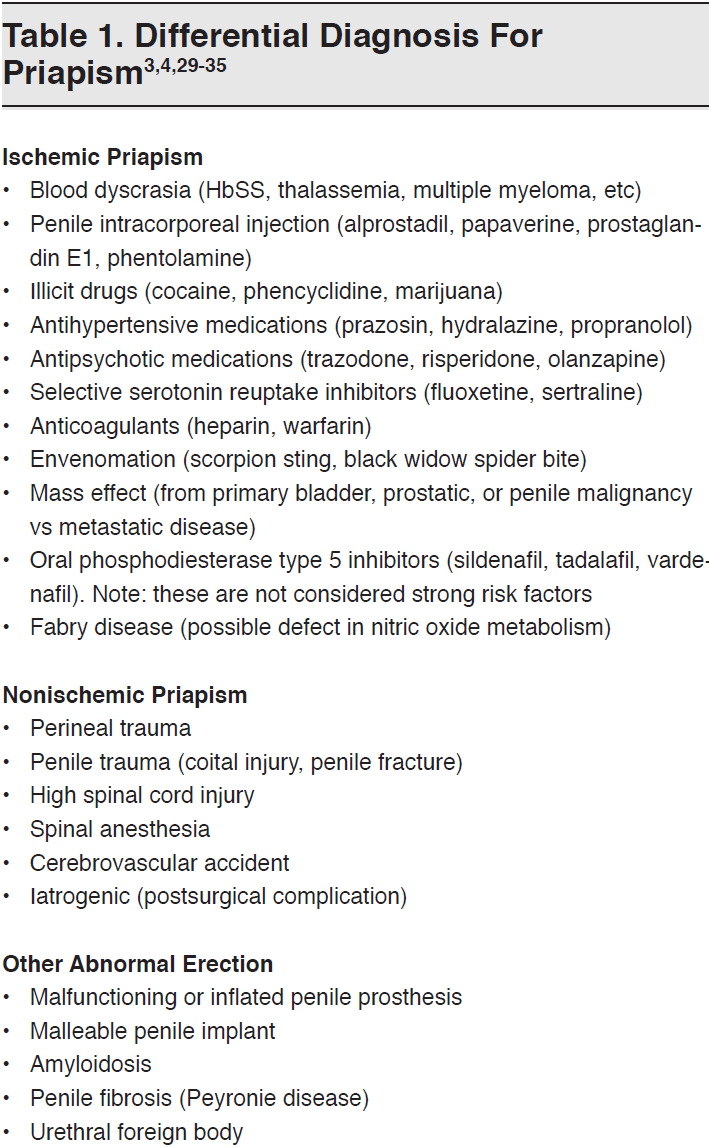 To help the reader judge the strength of each reference, pertinent information about the study is included in bold type following the reference, where available. The most informative references cited in this paper, as determined by the authors, are noted by an asterisk (*) next to the number of the reference.