Hemophilia and von Willebrand disease are the most common inherited bleeding disorders encountered in the emergency department. Evidence suggests that the management of bleeding disorders in the emergency department is currently suboptimal, and literature to guide evaluation and management in this setting is limited, though some guidelines do exist. The emergency clinician must have a high index of suspicion for new diagnoses, particularly in young patients with unprovoked bleeding and children with multiple or severe bleeds. The foundation of hemophilia treatment is urgent clotting factor replacement, with replacement goals guided by the presenting complaint. Bleeding in von Willebrand disease may be treated with products containing von Willebrand factor or with desmopressin. This review focuses on the epidemiology, pathophysiology, common presentations, evaluation strategies, and emergency management of these bleeding disorders.

A 7-year-old boy with a history of severe hemophilia B, who receives scheduled prophylactic factor IX 3 times a week, presents to the emergency department after rolling off a bed 3 feet from the ground and striking his head. He complains of a mild headache at this time. On examination, there is no palpable scalp hematoma, and the neurologic examination is entirely normal. The patient’s last prophylactic factor infusion was 2 days ago. Given his normal examination at this time, is head imaging indicated? Should he receive a factor IX infusion? If so, when should it be administered, and how much should be given? The patient uses AlphaNine® SD brand factor IX for his factor replacement at home, but your emergency department only stocks BeneFIX® brand factor IX. Is it okay to switch factor products? Are there risks to doing so?

A 17-year-old adolescent boy with a history of severe hemophilia A with a high-titer inhibitor presents to the emergency department with pain and swelling in his right knee that developed at school that day. There is no history of antecedent trauma. Examination of the affected knee reveals a large effusion and pain with flexion > 90°. Are there laboratory studies or imaging that could aid in diagnostic decision-making? Should you perform arthrocentesis either diagnostically or therapeutically? Should you treat with a factor VIII concentrate? How does the presence of a high-titer inhibitor change your management? Your ED stocks both FEIBA and recombinant factor VIIa as bypassing products. Is one better than the other for this patient? Can this patient be discharged from the emergency department after treatment or does the presence of inhibitors preclude home management?

A 16-year-old girl presents to the emergency de-partment with a 1-month history of menorrhagia. Her primary care physician has seen her for this complaint previously and has sent laboratory tests, including a complete blood count and prothrombin time/partial thromboplastin time, which were normal. Her von Willebrand panel was significant for a low von Willebrand factor antigen level (vWF:Ag) of 20 IU/dL and a low ristocetin cofactor activity level (vWF:RCo) of 22 IU/dL. She has not started any treatment. What is her likely diagnosis, and what treatment options are available for this patient to decrease menorrhagia? Should she receive oral contraceptive pills, desmopressin, and/or aminocaproic acid? What risks are associated with these therapies? Should her family members seek testing for bleeding disorders?

Hemophilia and von Willebrand disease (vWD) represent the most common inherited bleeding disorders, and, consequently, those most likely to be encountered in the emergency department (ED).1 Hemophilia A and B are X-linked recessive disorders caused by the deficiency or absence of coagulation factors VIII and IX, respectively. The overall incidence of hemophilia is 1 per 5000 male births. Hemophilia A is significantly more common than hemophilia B, representing 80% of all hemophilia cases.2 Significant and often life-threatening bleeding (either spontaneous or trauma-induced) is the hallmark of this disease.3 Historically, hemophilia was associated with a dismal prognosis, with most patients dying at a young age of uncontrolled hem-orrhage.3 However, life expectancy has increased dramatically in the past 50 years with the advent of plasma-derived and recombinant clotting factor concentrates for treatment of hemophilia. Life expectancy for hemophilia patients in developed countries with comprehensive longitudinal care now approaches that of the general male population.4,5

Von Willebrand disease is significantly more common than hemophilia; however, bleeding in vWD is generally much less severe than that seen in hemophilia. Epistaxis, menorrhagia, oral bleeding, easy bruising, and greater-than-expected postsurgical bleeding are typical presentations of vWD compared to hemophilia, in which more-severe joint, intracranial, and intramuscular hemorrhages are observed.6 Unlike hemophilia, vWD affects men and women equally, with a prevalence as high as 1% of the population, although significantly fewer people will be symptomatic from the disease.7 Von Willebrand disease is not an X-linked disorder, and multiple genetic inheritance patterns exist. Among these, autosomal dominant is the most common pattern. Von Willebrand disease is caused by quantitative or qualitative deficiencies in von Willebrand factor (vWF), a glycoprotein important for platelet aggregation and adhesion to sites of vessel injury.8

A literature search was performed in PubMed using the search terms hemophilia, factor VIII deficiency, factor IX deficiency, Christmas disease, children, and pediatric. This search yielded 5999 results that were evaluated by the authors, with 118 papers deemed relevant to this review of hemophilia A and B. A separate search was conducted using the search terms von Willebrand disease, children, and pediatric. This search yielded 1132 results which were reviewed, identifying 30 relevant references for vWD. The Cochrane Database of Systematic Reviews was searched using the key terms hemophilia and von Willebrand disease. This search yielded 12 results, 3 of which were relevant to this ED-focused review.

A search of The National Guideline Clearinghouse (www.guideline.gov) yielded 2 sets of guidelines for hemophilia from the World Federation of Hemophilia and the British Committee for Standards in Haematology, and 1 guideline for vWD from the National Heart, Lung, and Blood Institute of the National Institutes of Health. Most recommendations regarding acute treatment of inherited bleeding disorders contained within the hemophilia guidelines are level IV (based on case series/historically controlled studies), with the exception of recommendations for factor prophylaxis, which have stronger evidence (level II, based on randomized controlled trials). For vWD, recommendations are largely derived from case series and retrospective reports (almost all grade C recommendations with level IV evidence).

The absence of a significant number of large randomized trials for hemophilia is multifactorial. Modern hemophilia care began with the development of plasma-derived factor concentrates in the 1960s. Subsequent research was confounded by the staggering number of patients with hemophilia who were affected by HIV infections contracted via plasma-derived clotting factor infusions in the late 1970s and early 1980s.17 A 1998 study by Rosenberg and Goedert estimated that nearly half of all patients with hemophilia living in the United States were infected with HIV.18 Despite being the most common inherited clotting factor deficiency, hemophilia remains a rare disease, and randomized controlled trials generally require multicenter participation to accrue an adequate number of patients. Modern national registries for patients with hemophilia have aided in consolidating retrospective information on these patients, but they have not effectively facilitated a large number of prospective multicenter trials.19

Defining vWD has been challenging for the purpose of creating cohorts of subjects.7 Many patients with abnormal testing on von Willebrand laboratory panels have no clinical manifestations of bleeding, and, yet, some patients with equivocal testing on von Willebrand panels are significantly symptomatic.8 These complications have made accurate identification of a study population more challenging. Because of the rational basis for giving factor concentrates in cases of acute bleeding in pediatric patients, the relatively low risk of doing so in the era of recombinant factor concentrates, and excellent infection screening for plasma-derived products, a randomized trial withholding factor concentrates for patients with acute bleeds is not feasible, nor is it appropriate. 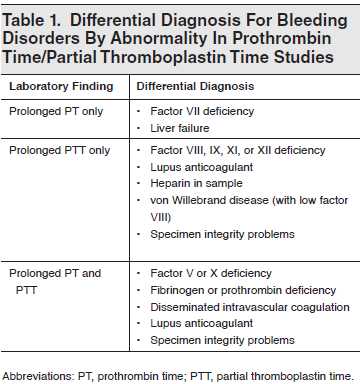 To help the reader judge the strength of each reference, pertinent information about the study, such as the type of study and the number of patients in the study will be included in bold type following the references, where available. The most informative references cited in this paper, as determined by the author, will be noted by an asterisk (*) next to the number of the reference.