A 4-year-old boy with no chronic medical problems is evaluated in the ED after a single episode of quarter-sized bright red hematemesis. He has normal vital signs. His parents report no additional symptoms, but note that, on an as-needed basis, he is taking diphenhydramine for allergic rhinitis as prescribed by his pediatrician. At the bedside, you observe that he is eating lunch while watching cartoons. He has bilateral allergic shiners along with edematous and friable nasal mucosa, but the physical examination is otherwise unremarkable. You have a high suspicion for epistaxis and consider the need for further testing.

A 10-year-old boy with a history of biliary atresia, who underwent a Kasai procedure at the age of 3 months, presents with 2 episodes of vomiting containing a teaspoon of bright-red blood. His heart rate is 110 beats/min, and his vital signs are otherwise normal. He is alert and conversant. He has scleral icterus and a palpable spleen tip 3 cm below the left costal margin. He denies abdominal pain and any changes in his bowel pattern. A sample of the vomitus is brought to the ED, and bedside point-of-care testing for gastric blood is positive. You order laboratory tests for this patient and consider additional testing.

You are then called into the resuscitation room where you find a 16-year-old girl with no past medical history who reports a 1-week history of abdominal pain and 2 days of emesis. The emesis was initially only tinged with blood, but in the last 24 hours, it has contained “blood clots.” She is diaphoretic, pale, and listless. Her heart rate is 140 beats/min and her blood pressure is 75/48 mm Hg. You ask the nurse to obtain intravenous access and give a normal saline bolus, and you emergently ask for consultation with a gastroenterologist. While waiting for a response, you contemplate your management options.

Upper gastrointestinal (GI) bleeding is defined as bleeding that originates in the GI tract proximal to the ligament of Treitz, which is located at the duodenojejunal flexure. The causes of upper GI bleeding in children range from benign to life-threatening. Children presenting with life-threatening causes of acute upper GI bleeding are uncommon in the emergency department (ED), but significant morbidity can result if there are delays in recognition and treatment. These cases can be challenging and anxiety-provoking to the family, child, and medical care team.

Most upper GI bleeds present with hematemesis (the vomiting of blood), whereas melena or hematochezia are less common.1 The color of the bleeding is bright red, dark red, or brown (with a “coffeeground” appearance), depending on the amount of time hemoglobin has been denatured in the acidic gastric environment. Melena is the passage of dark or black stools per rectum that are often sticky (“tarry stools”), appear shiny, and may have a sickeningly sweet aroma.2 Hematochezia is the rectal passage of bright-red or maroon-colored stools. In most cases, hematochezia is suggestive of bleeding from the descending colon.2 However, in pediatric patients with rapid GI transit times and/or brisk blood loss, hematochezia may be from an upper GI source.

Relying on the best available evidence from the literature, we will review the differential diagnosis of upper GI bleeding in children, and discuss key points regarding the diagnosis and initial management of children with an upper GI bleed.

1. “The patient had epigastric pain with a lot of blood in the stool without hematemesis, so I didn’t consider the source of bleeding to be upper GI.”

While most upper GI bleeds present with hematemesis, it less commonly presents with melena or hematochezia. However, in pediatric patients with rapid GI transit times and/or brisk blood loss, hematochezia may occur from an upper GI source.

2. “The nurse showed me some of the emesis, and it appeared to be only a small amount, so I discharged the patient home to follow up with the primary care physician.”

3. “I didn’t consider a variceal bleed, as the patient had normal liver enzymes and no hepatomegaly on examination.”

Caution should be noted with cirrhosis or end-stage liver disease where a patient may have a misleadingly normal or shrunken liver. Additionally, normal liver enzymes do not fully exclude liver problems as a patient with cirrhosis or end-stage liver disease may have normal or only mildly elevated liver enzymes in the setting of significant liver dysfunction.

4. “The patient had a history of hematemesis with epigastric pain. I suspected the source to be ulcer-related, so I ordered oral sucralfate and an intravenous dose of a PPI.”

Locally acting drugs, such as magnesium hydroxide, aluminum hydroxide, and sucralfate, can play a complementary role in treating peptic ulcer disease. However, because they have the potential to make endoscopic visualization of lesions more difficult, their use should be discussed with a gastroenterologist.

5. “On arrival, the patient was tachycardic from an upper GI bleed. NG lavage was performed and the fluid cleared. The patient’s heart rate improved after several normal saline boluses, and he appeared stable, so I admitted him to the basic unit. Later, the child decompensated and ended up in the ICU requiring emergent endoscopy.”

Patients with significant upper GI bleeding should be admitted and observed in the ICU setting for at least 24 hours. The initial well appearance of a child with an upper GI bleed admitted to the hospital should not be cause for complacency, as children with bleeding from sources such as deep ulcers and varices can decompensate quickly.

6. “The NG aspirate looked bright red and the Hemoccult® test was negative, so I discharged the patient home with the assumption that the red was food coloring.”

The Hemoccult® test commonly used to check for blood in samples obtained per rectum may produce false-negative results in the presence of acid from the stomach. The Gastroccult® kits incorporate more alkali to neutralize the gastric acid in the emesis and are a more reliable indicator of the presence of blood in suspected hematemesis.

7. “I placed an NG tube and initially noted brightred blood in the aspirate. After several lavages with saline, it cleared. Since the bleeding stopped, I discharged the patient home with a prescription for a PPI and recommended close follow-up with the primary care physician.”

Effluent that is initially red on NG lavage and then clears suggests either a slower rate of bleeding or previous bleeding that has stopped. Patients with upper GI bleeds should be admitted for consultation with a gastroenterologist for possible endoscopy to determine the source and management of the upper GI bleed.

8. “The toddler was spitting up blood and drooling on presentation; however, the NG aspirate was negative for gross blood and laboratory studies were normal, so I discharged him home with recommendations to follow up with the primary care physician within 24 hours.”

The use of gastrostomy tubes for lavage may lead to false-negative findings and/or underestimation of the severity of bleeding. Emergency clinicians should strongly consider placing an adequately sized NG tube even in patients with existing gastric tubes when the index of suspicion for GI bleeding is high or the consequences of delaying a diagnosis or underestimating the severity of a GI bleed is significant.

10. “The toddler had multiple episodes of hematemesis in the ED. I passed an NG tube and started gastric lavage with ice-cold fluids to slow down the bleed.”

The older practice of using iced saline for gastric lavage is no longer recommended and may induce iatrogenic hypothermia, particularly in infants and young children. 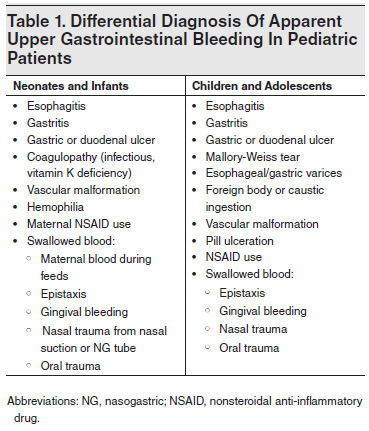 To help the reader judge the strength of each reference, pertinent information about the study will be included in bold type following the reference, where available. The most informative references cited in this paper, as determined by the author, will be noted by an asterisk (*) next to the number of the reference.