Prior to beginning this CME activity, please review the CME Information.

The San Francisco Syncope Rule predicts risk for serious outcomes at 7 days in patients presenting with syncope or near syncope. 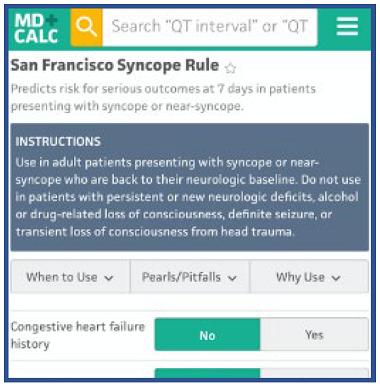 Syncope may be relatively benign, or it may be a manifestation of serious underlying pathology. The gestalt of the emergency clinician is highly sensitive but poorly specific for predicting high-risk patients. The creators of the San Francisco Syncope Rule designed it to improve specificity while maintaining high levels of sensitivity. This tool can be utilized to predict low-risk syncope patients who are unlikely to benefit from aggressive workup and hospitalization, thus reducing unnecessary testing, healthcare costs, and potential harms associated with hospitalization.

The most common serious outcome in the studies of the San Francisco Syncope Rule was cardiac dysrhythmia; most of those were bradydysrhythmias or sick sinus syndrome, and the remainder were supraventricular or ventricular dysrhythmias. Other common serious outcomes in patients misclassified as low-risk were stroke and intracranial hemorrhage. Validation studies were not able to replicate the high sensitivity found in the original studies published by the creators of the rule.

A commonly used mnemonic to recall the 5 variables of the San Francisco Syncope Rule is “CHESS”:

Since its inception, the San Francisco Syncope Rule has undergone considerable scrutiny and has been evaluated in validation trials and meta-analyses (key studies include Sun 2007 and Birnbaum 2008). The initial derivation study (Quinn 2004) was a single-center, prospective cohort study of 684 patients with a chief complaint of syncope or near-syncope. Fifty predictor variables selected from literature review and expert consensus were incorporated into a survey completed by the physician evaluating the patient after a syncopal episode. The patients were followed through hospital admission and/or contacted at 7 days after the initial presentation to assess for serious outcomes. The predictor variables associated with serious outcomes were identified on univariate analysis. Recursive partitioning was used to find the best combination of predictor variables that would maximize specificity while preserving high sensitivity. Once the combination of predictors was identified, the rule was applied to the derivation set of patients, resulting in sensitivity of 96% and specificity of 62%.

The rule was validated by Quinn et al 2 years later with another single-center, prospective cohort study of 760 patients. Physicians treated patients with syncope or near-syncope in their usual manner and were then asked to fill out a questionnaire about the patients, which included the 5 San Francisco Syncope Rule syncope predictors. After following the patients for 30 days, the San Francisco Syncope Rule was able to predict serious outcomes in all but 1 patient (98% sensitivity). The rule had higher specificity than physician judgment (56% specificity), with an estimated decrease in overall admission rate by 7%, if applied. The single missed patient was suspected to have had transient ischemic attack related to extensive carotid and vertebral artery disease requiring a stent.

Several external validation studies and meta-analyses have also examined the San Francisco Syncope Rule since the derivation study. Sun et al externally validated the rule with a single-center, prospective cohort study with a sample size of 477 patients. Using definitions, exclusion criteria, and methods similar to the internal validation study, the authors found a sensitivity of 89% and a specificity of 42%. Of the 6 patients misclassified as low-risk, 3 had dysrhythmias, 1 had a cerebrovascular accident, 1 had an intracerebral hemorrhage, and 1 had hypertrophic obstructive cardiomyopathy. This study also compared physician judgment to the clinical decision rule. Physician judgment had a sensitivity of 100% and a specificity of 30% for predicting serious outcomes at 7 days.

Another single-center, prospective, observational cohort study by Birnbaum et al performed at a large urban academic center found that the San Francisco Syncope Rule did not perform as well as previously reported. The study found the rule had a sensitivity of 74% and specificity of 54% for predicting serious outcomes at 7 days. The rule would have decreased the overall admission rate by 41%, but it misclassified 16 of the 61 patients who had serious outcomes as low-risk. Physician judgment in this study was 100% sensitive. In a written response to the study published in the Annals of Emergency Medicine, the derivation study authors criticized the validation study for incorrect application of ECG criteria used to define “high risk” in the study. The original study authors argued that the subjective interpretation of the ECG is enhanced when performed by a treating physician who is familiar with the clinical context. They posited that the sensitivity of the rule in the New York study was reduced because ECGs were evaluated retrospectively by experts rather than by the physician seeing the patient.

Meta-analyses published in the Annals of Emergency Medicine and the Canadian Medical Association Journal found sensitivity and specificity similar to the external validation study by Sun et al. The Annals of Emergency Medicine meta-analysis found 86% sensitivity and 49% specificity, while the Canadian Medical Association Journal meta-analysis found 87% sensitivity and 52% specificity. The most commonly missed serious outcome in all of the studies assessing the predictive value of the San Francisco Syncope Rule was cardiac dysrhythmia.

Credit Designation: EB Medicine designates this internet enduring material for a maximum of 4 AMA PRA Category 1 CreditsTM. Physicians should claim only the credit commensurate with the extent of their participation in the activity.

Needs Assessment: The need for this educational activity was determined by a practice gap analysis; a survey of medical staff; review of morbidity and mortality data from the CDC, AHA, NCHS, and ACEP; and evaluation responses from prior educational activities for emergency physicians.

Goals: Upon completion of this activity, you should be able to: (1) identify areas in practice that require modification to be consistent with current evidence in order to improve competence and performance; (2) develop strategies to accurately diagnose and treat both common and critical urgent care presentations; and (3) demonstrate informed medical decision-making based on the strongest clinical evidence.

CME Objectives: Upon completion of this activity, you should be able to: (1) describe clinical findings of low-risk and high-risk syncope in the urgent care setting; (2) identify diagnostic studies that safely and cost-effectively lead to improved risk stratification of syncope; and (3) discuss the indications for ED transfer of postsyncopal patients.

Faculty Disclosure: It is the policy of EB Medicine to ensure objectivity, balance, independence, transparency, and scientific rigor in all CME activities. All faculty participating in the planning or implementation of a CME activity are expected to disclose to the participants any relevant financial relationships and to assist in mitigating the relationships. In compliance with all ACCME accreditation requirements and policies, all faculty for this CME activity were asked to complete a full financial disclosure statement. The information received is as follows: Update Contributors (April 2022): the author and Editor-in-Chief, Dr. Keith Pochick; and peer reviewer, Dr. Joseph Toscano, report no relevant financial relationships with ineligible companies. The charting tips author, Dr. Patrick O’Malley, reported receiving royalty payments from Medline Industries. This relationship has been mitigated by attestation and peer review. Original Con¬tributors (June 2021): Dr. Morris, Dr. Diercks, Dr. Probst, Dr. Toscano, Dr. Mishler, Dr. Jagoda, and their related parties report no significant financial interest or other relationship with the manufacturer(s) of any commercial product(s) discussed in this educational presentation.

Commercial Support: This issue of Evidence-Based Urgent Care did not receive any commercial support.

Earning Credit: Go online to www.ebmedicine.net/CME and click on the title of the test you wish to take.When completed, a CME certificate will be emailed to you.

Hardware/Software Requirements: You will need a computer, tablet, or smartphone to access the online archived article, podcast, and CME test.

Syncope can be the result of causes ranging from benign to life threatening. A detailed history and physical examination, along with an ECG, are among the most important aspects of the workup for a postsyncopal patient, and must be documented.

Atrial Fibrillation: An Approach to Diagnosis and Management in the Emergency Department