Evidence-Based Management Of Caustic Exposures In The Emergency Department

Caustics are common in household and industrial products, and, when ingested, they can pose a significant public health risk. Caustic exposures in adults typically present in the setting of occupational exposure or suicide attempt; exposures in children occur most often by unintentional ingestion. Caustics cause local damage upon contact with tissue surfaces and can lead to systemic toxicity. Endoscopy is recommended in all intentional ingestions (and many unintentional ingestions) to grade injury severity, determine treatment options, and assess prognosis; however, it is generally best performed within 24 hours post ingestion to avoid risk of perforation. Radiography and computed tomography may also be used to visualize injury in certain cases. This review examines the pathophysiology of caustic exposures, their clinical presentations, and the most current evidence on recommendations for decontamination, surgical consult, treatment, and disposition.

A 2-year-old girl presents to the ED with her parents, who state that they saw her drink a mouthful of toilet bowl cleaner that was in an unmarked container that had been left unattended. She cried and vomited immediately post ingestion. Upon presentation to the ED, she is still crying. Her vital signs are: heart rate, 164 beats/ min; blood pressure, 94/65 mm Hg; respiratory rate, 30 breaths/min; and oxygen saturation, 98% on room air. She is afebrile. Inspection of the skin and oropharynx is unremarkable, without ulcerations, lesions, or evidence of edema, and she is tolerating her secretions. Her lungs are clear to auscultation, and cardiac examination is significant only for tachycardia. Her abdominal examination demonstrates mild epigastric tenderness. You wonder about the best way to manage this patient: Does she need an IV? Laboratory tests? Imaging? Admission?

A 35-year-old man presents to the ED 2 hours after deliberate ingestion of a bottle of drain cleaner containing sodium hydroxide. He experienced chest pain and abdominal pain post ingestion and had 3 episodes of bloody emesis prior to arrival. In the ED, he appears uncomfortable. His vital signs are: heart rate, 120 beats/min; blood pressure, 120/80 mm Hg; respiratory rate, 25 breaths/ min; oxygen saturation, 98% on room air. He is afebrile. His physical examination is significant for abdominal pain with guarding and rebound as well as superficial ulceration of the oral mucosa. The nurse attaches the patient to the monitor and establishes IV access and then asks you, “Doctor, what should we do next?” (You think, "Good question.")

A caustic or corrosive is a xenobiotic that causes damage to tissue surfaces upon contact. Caustics are routinely found in household and industrial products as well as cosmetics and personal care items. According to the 2013 Annual Report of the American Association of Poison Control Centers Toxic Exposure Surveillance System, 91% of all toxic exposures occur in the home.1 A list of common caustics and their uses is presented in Table 1. 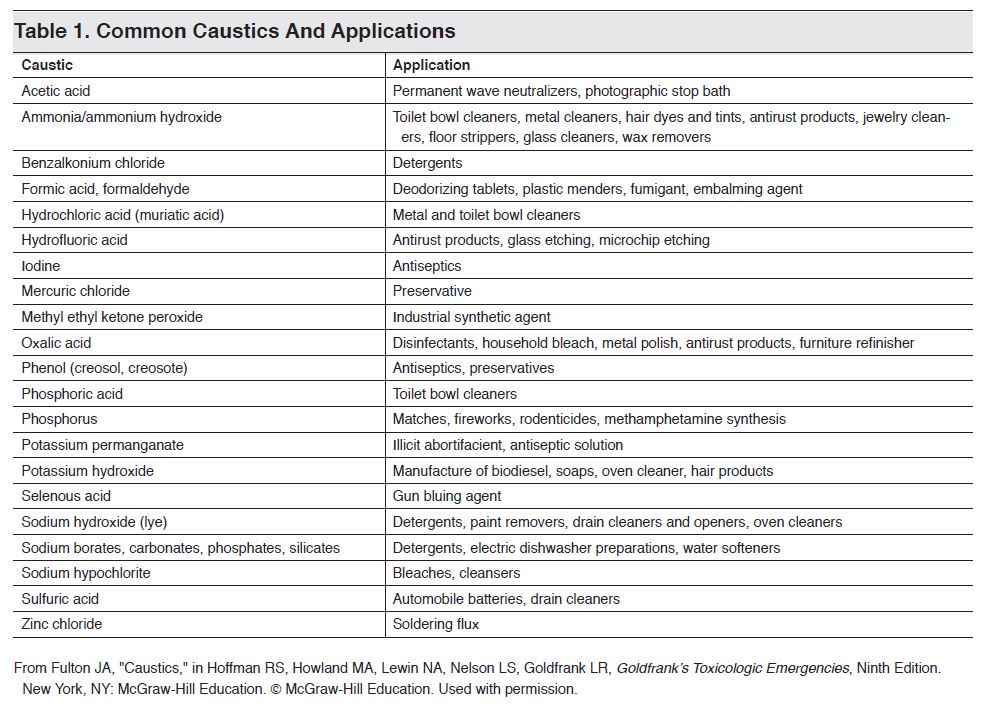 Caustic exposures can occur via dermal, ocular, inhalation, and oral routes. Ingestion is the main cause of long-term morbidity and mortality. Injuries from caustic ingestion can range from mild gastrointestinal irritation and ulceration to life-threatening necrosis, perforation, and/or systemic toxicity.

Caustic ingestions follow a bimodal pattern, with peak occurrences in the pediatric population aged 1 to 5 years and then again later in adulthood.2 Eighty percent of reported caustic injuries occur in children, most often via unintentional exposure to household products, with the greatest incidence around 2 years of age.3,4 Adults may be exposed to household or industrial products as a result of an occupational accident or a suicide attempt.5 In children, 18% to 46% of all caustic ingestions are associated with esophageal burns. This percentage is likely higher in adults, who typically have more-severe injuries due to the greater volume of exposure when a caustic is consumed with suicidal intent versus unintentional ingestion.6,7

Caustic exposures have been a public health concern throughout history. Legislative changes, such as the mandating of child-resistant packaging and mandatory concentration reductions for household chemicals, in addition to public education campaigns for safer storage practices, have been employed to prevent poisonings. However, despite these efforts, caustic exposures still occur. In the United States, it is estimated that more than 200,000 exposures to household or industrial cleaning products and 5000 to 15,000 caustic ingestions occur annually.7-9

Fortunately, serious caustic exposures are uncommon events, but the emergency clinician must be able to recognize this potentially life-threatening entity and initiate proper therapies expediently. In this issue of Emergency Medicine Practice, we review basic pathophysiology and provide best-practice management recommendations for patients with caustic exposures.

A literature search was completed using PubMed, which included MEDLINE®, Embase®, Web of Science, Cochrane Database of Systematic Reviews, Evidence-Based Medicine Reviews (EBMR), Database of Abstracts of Reviews and Effectiveness (DARE), and the National Guideline Clearinghouse databases. Studies were limited to meta-analyses, systematic reviews, clinical trials, and case reports/series. The search was separated into 3 separate concepts to include all keyword variations and achieve maximum sensitivity. The concepts included: (1) caustics, (2) ingestion, and (3) study type.

A total of 494 citations were found in MEDLINE®, 168 citations in Embase®, 76 citations in Web of Science, 0 citations in CDSR, DARE, and EBMR (searched together in 1 database), and 1 citation in the National Guidelines Clearinghouse, for a total of 739 citations. Foreign language articles with an abstract available in English were included, and those without an English-language abstract were excluded. The bibliographies of pertinent review articles and reference texts were reviewed to ensure important literature was not overlooked.