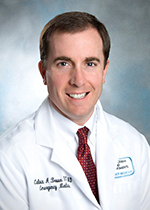 Dr. Brown’s primary areas of interest include airway management research, process improvement, and medical student/resident education.  He has received the Outstanding Attending of the Year Award in four consecutive years (2008-2011) in recognition of the BWH faculty who exhibits excellence in emergency medicine resident education and mentorship.