Dog bites account for the majority of reported mammalian bites in the ED, followed by bites from cats and humans. It is thought that cats might actually be the cause of more bites than dogs, but that these injuries are not reported as often. Occasionally, patients with other types of mammalian bites seek treatment in an ED, but aside from case reports, there is minimal literature regarding these other types of animal bites.

Children are bitten by dogs more frequently than are adults.3 In adults and older children, most bites occur to the upper extremity (45.3%), followed by lower extremity (25.8%) and the head/neck region (22.8%).3 In sharp contrast, younger children are much more likely to sustain bites to the head, face, or neck (41.5%-73%).3-6 Among children, boys tend to be bitten more frequently, but this sex difference does not seem to apply in adults.3

Dogs that bite usually inflict more initial damage than cats, due to the fact that dogs have very powerful jaws that are capable of exerting pressures of 200 to 450 psi.7 (See Figure 1.) Crush injuries are much more common in dog bites because of this increased pressure and the fact that dogs have rounded teeth. This pattern leads to higher rates of complications and death from dog bites. 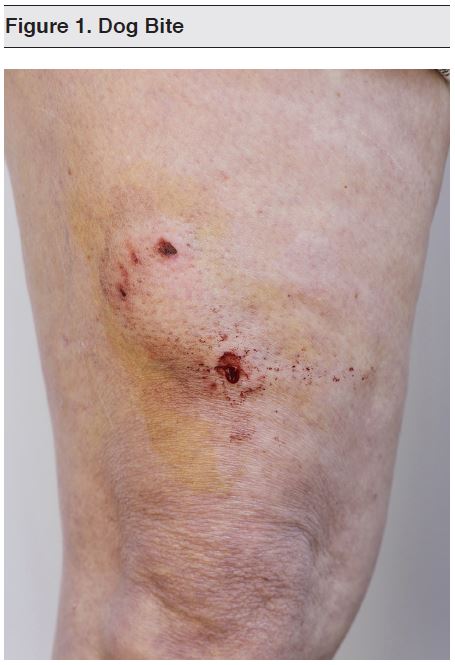 Dog-bite wounds to the head of infants and small children must be evaluated very carefully. Complications include depressed skull fractures, dural injuries with cerebrospinal fluid leaks, traumatic brain injuries, and subsequent infections, such as meningitis and brain abscess.

Dog-bite fatalities are on the rise, with a recent report documenting 28 fatalities per year in the United States.8 Pit bull and Rottweiler breeds seem to account for the most human fatalities related to dog bites.9 Fatal bites typically involve children, with bites to the neck that result in exsanguination.

Dog-bite wounds are commonly polymicrobial.10,11 The most comprehensive study on the microbial profile of dog bites was performed by Talan et al, showing a mixed aerobic and anaerobic infection in 48% of dog bites, with a median number of 5 isolates per culture.11 Pasteurella species were the most commonly isolated organisms, with a predominance of Pasteurella canis (20%).11 Other common isolates include Streptococcus, Staphylococcus, and Neisseria species.10,11 The most common anaerobic species were from the genera Fusobacterium, Bacteroides, Prevotella, and Propionibacterium.10,11 (See Table 1.) 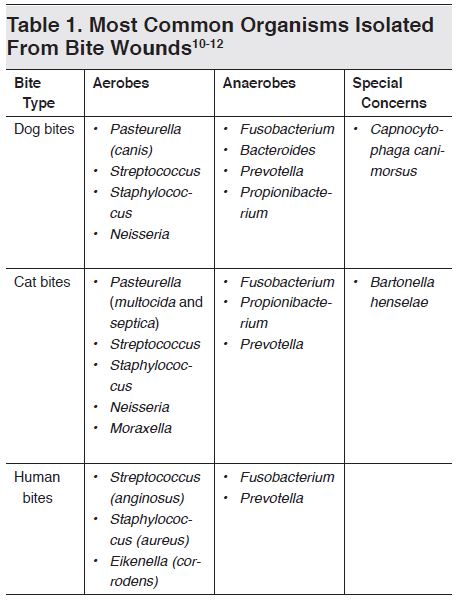 Cat bites account for 5% to 15% of all domestic animal bites.13,14 Cat bites are more common in women.15 The majority of bites and scratches from felines involve the upper extremities, particularly the hand.15

Cat-bite wounds are often small and innocuous-appearing, and tend to be underestimated. Cats’ teeth can cause puncture wounds that go deep into tissues. (See Figure 2.) Cat bites are more likely to require advanced treatment and they have an infection rate double that of dog bites.16 If not treated promptly, these seemingly mild wounds could ultimately require surgical repair and result in permanent impairment.13 Serious symptoms and signs of infection can occur as early as 3 hours after the bite.17 Infection is the most common complication from bites to the hand and may lead to cellulitis, tenosynovitis, septic arthritis, and osteomyelitis. 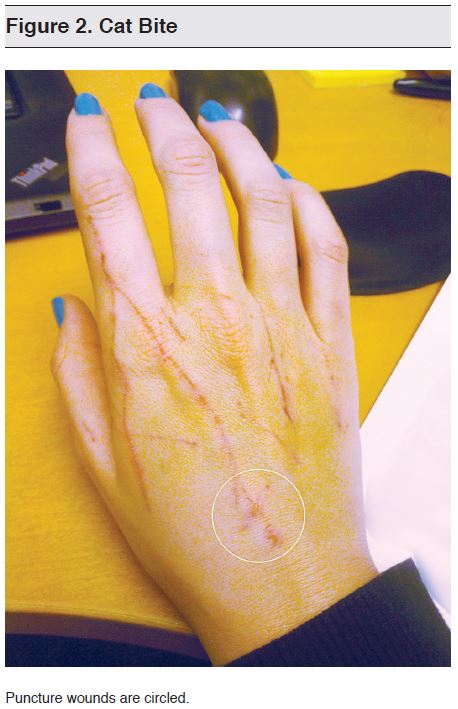 Cat bites have a microbial profile similar to that of dog bites, but they are even more likely to be polymicrobial, with mixed aerobic and anaerobic infection evident in 63% of bites.10,11 Like dog bites, the most commonly isolated species is Pasteurella, with Pasteurella multocida being the most common (54%) followed by Pasteurella septica (28%).10,11 Streptococcus, Staphylococcus, Neisseria, and Moraxella are the next most common isolates. The most common anaerobic species are from the genera Fusobacterium, Propionibacterium, and Prevotella.10,11 (See Table 1.)

Human bites are more common among men, with the highest incidence occurring in the age groups of the late teens and twenties.18 In a recent retrospective review, it was determined that the majority of bites occur during altercations (66.5%).19 The most common locations for bites are the hands and fingers (50.3%), followed by the extremities (23.5%), and the head and neck (17.8%).18 The actual incidence of human bites is likely underestimated because sufferers tend not to seek medical care.

Closed-fist bites occur when an individual hits another person’s teeth with a closed fist. One study showed that the teeth penetrated the joint capsule and extensor mechanism in two-thirds of cases of closed-fist bites.20 When the hand goes back to its resting position, the extensor tendon is drawn into the capsule and the capsular tear seals, creating an environment ripe for bacterial growth. Additionally, bacteria can spread up the tendon sheath, leading to infection proximal to the actual bite. This type of injury is worrisome, but it actually represents only about 8% of all human bites.20

Human bites are notorious for inducing infection. The number of prospective studies on the presentation of infections is limited due to difficulties in obtaining an adequate number of patients, but a prospective multicenter study that focused on infected bites showed that 56% of the injuries were closed-fist injuries and 44% were occlusive bites.12 The closed-fist injuries were more likely to become infected. Of the patients in the study, 86% had wounds to the hands. All of the wounds were cultured, yielding a median of 4 isolates.12 The most common organisms were Streptococcus (84%, with Streptococcus anginosus being the most common, at 54%), Staphylococcus (52%, with Staphylococcus aureus being the most common, at 30%), and Eikenella corrodens (30%). Additionally, this study found that 56% of all wounds had some component of anaerobic infection, and the most common organisms were Fusobacterium and Prevotella species.12 (See Table 1.)

With the increasing number of people keeping animals that were previously considered "wild" as pets, there has been a rise in bites from mammals other than dogs and cats. There are an estimated 28 million households in the United States that own nearly 45 million exotic pets.21

Rats are very prevalent, both as pets and as vermin. The true incidence of rat bites is probably underestimated due to underreporting. The most recent epidemiologic studies report an estimated 10 bites per 100,000 people per year in the United States22 and approximately 3000 ED visits for rat bites each year.23 Rats tend to be nocturnal, so most bites occur while the victim is sleeping and the bites tend to be on exposed areas of the body.24

Bat bites are a major concern because they are commonly overlooked injuries. Bats weigh only a few ounces, and their teeth are very sharp and close together. Their bite wounds tend to be pinpoint puncture wounds and sometimes can be seen only with magnification. (See Figure 3.)

Ferrets became increasingly popular as pets in the 1980s. Typically, humans are bitten as part of play. However, ferrets often see infants as prey, so they may unleash severe attacks, inflicting rapid-fire bite attacks that result in hundreds of bites in a short period of time.25 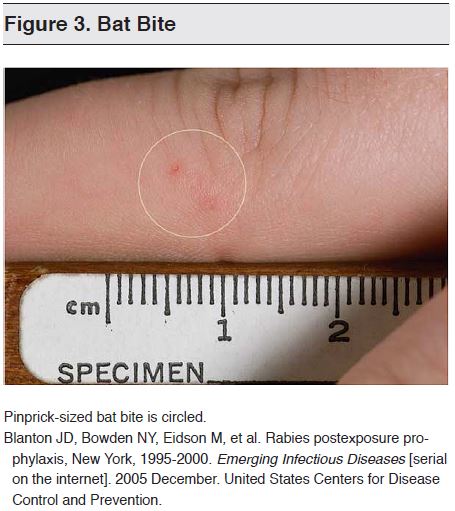 Accreditation: EB Medicine is accredited by the Accreditation Council for Continuing Medical Education (ACCME) to provide continuing medical education for physicians. This activity has been planned and implemented in accordance with the Essential Areas and Policies of the ACCME.

Specialty CME: Included as part of the 4 credits, this CME activity is eligible for 1 Infectious Disease CME credits, 0.5 Pharmacology CME credits, and 4 Trauma CME credits, subject to your state and institutional approval.

Faculty Disclosure: It is the policy of EB Medicine to ensure objectivity, balance, independence, transparency, and scientific rigor in all CME-sponsored educational activities. All faculty participating in the planning or implementation of a sponsored activity are expected to disclose to the audience any relevant financial relationships and to assist in resolving any conflict of interest that may arise from the relationship. In compliance with all ACCME Essentials, Standards, and Guidelines, all faculty for this CME activity were asked to complete a full disclosure statement. The information received is as follows: Dr. Edens, Dr. Michel, Dr. Jones, Dr. Galjour, Dr. Koyfman, Dr. Jagoda, Dr. Shah, Dr. Damilini, Dr. Toscano, and their related parties report no significant financial interest or other relationship with the manufacturer(s) of any commercial product(s) discussed in this educational presentation. Commercial Support: This issue of Emergency Medicine Practice did not receive any commercial support.