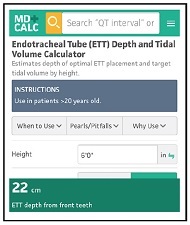 Why and When to Use, and Next Steps H4

Placing the ETT too deep may cause right mainstem intubation, hypoxemia, and pneumothorax. However, placing the ETT too shallow may risk injury to the vocal cords and accidental extubation. Standard approaches to verify ETT depth (eg, bilateral auscultation) are insensitive. Use of lower tidal volumes appears to prevent the development of acute respiratory distress syndrome, even in patients who do not have lung injury.

The Chula formula was developed and validated by Techanivate et al (2005) at King Chulalongkorn Memorial Hospital in Thailand. The authors prospectively validated the use of this formula among 100 patients in Thailand. Patients were intubated and the ETT placed according to the formula. Subsequently, a bronchoscope was used to determine the relationship among the ETT, carina, and vocal cords. The distance between the ETT and carina ranged between 1.9-7.5 cm. No patient was at immediate risk of endobronchial intubation. The upper border of the ETT cuff was always > 1.9 cm below the vocal cords, avoiding risk of laryngeal trauma or inadvertent extubation.

Pak et al in 2010 and Hunyady et al in 2008 developed similar assessments of optimal ETT placement. The average of the 3 scores (Pak, Hunyady, and Chula) is nearly identical to the Chula formula. 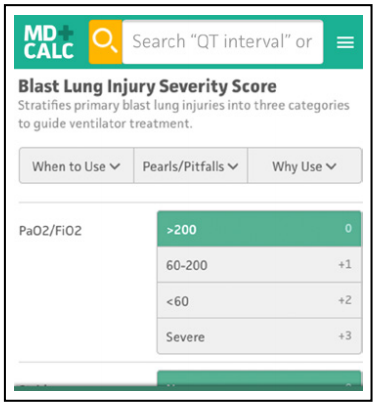 Use the BLI Severity Score in patients who have sustained blast injury and have respiratory symptoms (eg, cough, cyanosis, dyspnea, hemoptysis).

The original BLI Severity Score was proposed in 1999 by Pizov et al. The study evaluated 15 patients with primary BLI after explosions on 2 civilian buses. BLI Severity scores were compared to Murray scores for acute lung injury at 6 and 24 hours after injury; at 24 hours, there was good correlation between the proposed BLI score and the modified Murray score.

One year after the study by Pizov et al, Hirshberg et al conducted a follow-up study of the 11 surviving original patients. None of the 11 survivors had pulmonary-related complaints, and lung physical examinations were normal with complete resolution of chest radiograph findings.

In comparison, Avidan et al, in 2005, evaluated 29 patients with primary BLI, and only 1 patient had died (death occurred 24 days after admission from sepsis and multiple organ failure). The authors concluded that death because of BLI in patients who survived the explosion is unusual. Although these 29 patients were not categorized by BLI severity scores, there were 7 patients with PaO2 / FiO2 ratios < 60, 4 patients requiring positive end-expiratory pressure (PEEP) > 10 cm H2O, and 3 patients requiring unconventional therapies such as high-frequency ventilation or nitric oxide inhalations. The decreased mortality rate compared to Pizov et al, despite the presence of patients with characteristics of severe BLI, may be attributed to improvements in critical care and respiratory management.

Pediatric Chest Tubes And Pigtails: An Evidence-Based Approach To The Management Of Pleural Space Diseases