Diagnosis And Management Of Shock In The Emergency Department - Calculated Decisions

Diagnosis And Management Of Shock In The Emergency Department

Shock is a state of acute circulatory failure leading to decreased organ perfusion, with inadequate delivery of oxygenated blood to tissues and resultant end-organ dysfunction. The mechanisms that can result in shock are divided into 4 categories: (1) hypovolemic, (2) distributive, (3) cardiogenic, and (4) obstructive. While much is known regarding treatment of patients in shock, several controversies continue in the literature. Assessment begins with identifying the need for critical interventions such as intubation, mechanical ventilation, or obtaining vascular access. Prompt workup should be initiated with laboratory testing (especially of serum lactate levels) and imaging, as indicated. Determining the intravascular volume status of patients in shock is critical and aids in categorizing and informing treatment decisions. This issue reviews the 4 primary categories of shock as well as special categories, including shock in pregnancy, traumatic shock, septic shock, and cardiogenic shock in myocardial infarction. Adherence to evidence-based care of the specific causes of shock can optimize a patient’s chances of surviving this life-threatening condition.

You are working in the ED late one evening when an 82-yearold man is brought in by his son. His son reports that earlier today, his father had been in his usual state of health, but this evening he found his father confused, with labored breathing. On arrival, the patient has the following vital signs: temperature, 38°C; heart rate, 130 beats/min; blood pressure, 110/60 mm Hg; respiratory rate, 34 breaths/min; and oxygen saturation, 89% on room air. He is delirious and unable to answer questions. A focused physical examination demonstrates tachycardia without extra heart sounds or murmurs, right basilar crackles on lung auscultation, a benign abdomen, and 1+ lower extremity pitting edema. You establish intravenous access with a peripheral catheter and send basic labs. A further history obtained from the son reveals that his father has congestive heart failure with a low systolic ejection fraction, as well as a history of several prior myocardial infarctions that were treated with stent placement.

As you consider this case, you ask yourself whether this patient is in shock, and if he is, what are the specific causative pathophysiologic mechanisms? You review which diagnostic tests are indicated to assist with the differential diagnosis of shock and you consider options for the initial management of this patient.

Shock is a state of acute cardiovascular or circulatory failure. It leads to decreased delivery of oxygenated blood to the body's organs and tissues or impaired oxygen utilization by peripheral tissues, resulting in end-organ dysfunction.1 The physiologic mechanism of oxygen delivery to peripheral tissues (DO2) is described in the formula in Equation 1.

Blood pressure is not included in this formula; while shock is frequently associated with hypotension, patients may present with “cryptic shock” in which they have a blood pressure typically considered to be within normal ranges, yet they have pathophysiologic signs of shock (particularly early in their clinical course). Many patients in shock ultimately develop hypotension, but a high index of suspicion is necessary to identify patients with shock and normal blood pressures during their initial presentation.

As noted in Equation 3, cardiac output is determined by stroke volume and heart rate, and stroke volume is affected by preload, afterload, and contractility. The concept of preload influencing stroke volume (and thereby affecting cardiac output and DO2) is a core physiologic aspect of the assessment and management of patients in shock.

Changes in preload, stroke volume, system vascular resistance, and cardiac output can result in impaired tissue and organ perfusion. The impaired delivery of oxygen to peripheral cells that occurs in shock results in a transition from aerobic to anaerobic cellular metabolism. Anaerobic metabolism generates lactate via metabolism of glucose to pyruvate, and lactate can be used as a surrogate marker for tissue hypoxemia and the severity of shock. Cells can engage in anaerobic metabolism for a limited time, but persistent cellular hypoxia results in cell death and tissue necrosis, leading to multiorgan system dysfunction and failure. The saturation of venous oxygen measured from central vessels (such as the superior vena cava), is another biochemical marker of peripheral oxygen uptake and can be used diagnostically to help with prognosis in the comprehensive assessment of patients presenting in shock.

The pathophysiologic mechanisms that can result in shock are divided into 4 separate (but potentially overlapping) categories: (1) hypovolemic, (2) distributive, (3) cardiogenic, and (4) obstructive.2 Definitive treatment for patients in shock depends on the specific etiology; however, this may not be immediately clear on initial presentation to the emergency department (ED). As with much of emergency medicine, the initiation of therapy and patient stabilization may occur simultaneously with evaluation. The goals in treating patients in shock are restoring adequate organ perfusion and oxygen delivery while considering/treating the possible cause(s) of shock.

In early shock, compensation occurs by modulation of cardiac output and vascular tone by the autonomic nervous system.1 Carotid baroreceptors respond to decreased blood pressure by triggering increased sympathetic signaling. This autonomic nervous system-mediated sympathetic response results in an increase in contractility and heart rate, thereby increasing cardiac output. (See Equation 1 and Table 1). In addition, increased sympathetic signaling results in alpha-1 receptor activation and systemic vascular resistance. This issue of Emergency Medicine Practice analyzes the pathophysiology of the 4 types of shock and provides best practice recommendations on the diagnosis and management in the ED.

A literature search was performed using Ovid MEDLINE ® and PubMed from 1950 to December 2013. Areas of focus were shock, emergency management of shock, and emergency diagnosis of shock. Specific searches were performed for types of shock including the terms: hypovolemic, hemorrhagic, distributive, septic, neurogenic, anaphylactic, cardiogenic, obstructive, pulmonary embolism, and cardiac tamponade. Highquality review articles were noted and provided the foundation for additional primary literature review. Over 300 articles were reviewed, which provided background for further literature review.

The Cochrane Database of Systematic Reviews and the National Guideline Clearinghouse (www. guideline.gov) were also consulted.

Literature from emergency medicine journals was assessed. Although studies from the critical care or intensive care literature do not necessarily include ED patients, clinical lessons from these studies are often reasonable to apply to the ED population. Studies from cardiology literature were also included.

Pitfalls To Avoid In The Diagnosis And Management Of Shock

The TASH Score predicts the need for massive transfusion based on clinical and laboratory data. 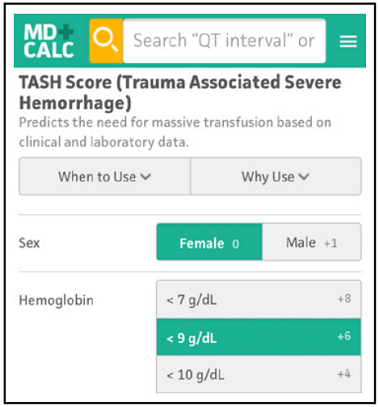 Use the TASH Score to determine when to initiate massive transfusion protocols on trauma patients.

The TASH Score was derived and validated from a database of over 35,000 patients in the trauma registry of the German Trauma Society (TR-DGU) to predict the need for massive transfusion.

Maegele et al revalidated the TASH Score on 5834 datasets from the 2004 to 2007 TR-DGU database with respect to discrimination, precision, and calibration. In comparing the score’s performance here to its initial performance, the performance of the score was enhanced, reflected by an increased receiver operating characteristic curve/area under the curve ratio of 0.905.

The studies described above almost exclusively involved blunt trauma patients. Subramanian et al conducted a retrospective analysis of all trauma cases registered at the JPNA Trauma Centre (a Level I trauma center) in New Delhi, India, including both blunt and penetrating trauma. The TASH Score had the highest diagnostic accuracy (57.1%) compared to other prediction models, including the Emergency Transfusion Score (22.8%) and the ABC Score (13.1%).

The number of variables required to calculate the TASH Score, relative to other prediction models, has been seen as another limitation. However, a prospective analysis by Mutschler et al concluded that the mean time to complete the TASH Score calculation in a cohort of trauma patients was within 8 minutes of arrival at the emergency department, which is similar to other prediction scores.